We warned you in the recent Eero vs Luma piece that lots more vendors were getting ready to play in the smart home WiFi space, and here comes the first of the challengers. Securifi is ready to roll with its update on last year’s Almond router box.  That model could offer a range extending function, by using multiple units, but this year’s update makes for a more seamless experience.

Looking very similar to that device, if not identical with just a bit of the Almond 3 Smart Home Wifi can connect one or more devices into a single network, and also offers ZigBee support out of the box, and Z-Wave support via a dongle, to make it an ideal choice for the smart home user. Compare that to the existing devices which are WiFi and BLE only, and you can see why the Almond might appeal. 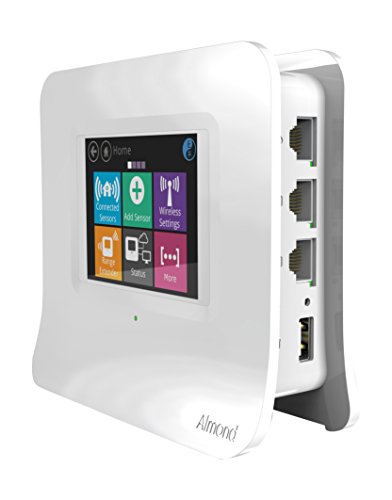 Due out in Summer, you can pre-order one unit or three-pack at lower prices than the recommended retail prices, which is why we’re talking about them now, rather than you missing out on the bargain (all prices at the time of this writing.) Each unit claims to support a 1,300 foot space, but that will vary with local factors and the devices in your home.

The main benefit here is the smart home protocol support to help bring better performance for your Zigbee and Z-Wave gadgets around the home, if there were any slow or dead spots, these are just the boxes to get your devices talking at speed. They should also help increase the performance of WiFi smart devices like home security cameras and so on.

Supporting all those protocols, Almond 3 can happily communicate with Nest, Hue, Yale and many other devices with the opportunity to assume voice control via Amazon Echo if you use any of Amazon’s growing family of smart devices.

The app is a big part of these product now, and Almond’s helps you monitor guest access, control what the children are doing, and monitor everything going on across the network remotely.  You can see what devices are using the network and block or limit them with a variety of rules. The app can also be used to help control your smart home devices, so you don’t need a cluster of apps to get your smart home going.

Pros of the Almond 3

Naturally, with that useful screen, setting up the Almond 3 is somewhat less hassle than with a traditional router. However, you can also take the app-based installation approach that the Luma and Eero offer. The touchscreen provides a painless route to putting the router in the right mode, setting the password, and launching you into control of your smart home.

A lot of careful design has gone into the 2.8-inch screen and the user interface to make the Almond something that anyone could use. Updating the router’s software is just a matter of tapping the Software Update button, nothing more complicated.

In use, the Almond provides steady if unspectacular WiFi performance, but its ability to help manage your smart home puts it far above what most routers will offer. The other interface is the app, which allows users to create and edit schedules or automation rules. Beyond the usual IFTTT commands, users can create complex automation workflows via multiple triggers launching various actions for great flexibility.

Inside the box is  dual-band AC1200 Wi-Fi unit to drive the radio communications. Rather randomly it also comes with an alarm as a security features, which is there if you feel the need. Around the edge are a couple of Ethernet ports to connect to home PCs, and a USB port for the dongle.

Overall, offering a single network home WiFi solution with smart home support built in is a great plus for those already well into their smart home journey. Providing a more secure, faster, and compatible smart home network should make this very popular among users.

Cons of the Almond 3

Since the Almond 3 units all have the same screen, there’s a whole load of redundancy going on here. Surely Securifi could reduce the price further by removing the screens from two of the units and going with a plain black plate. That would make it easier for them to fit in around the home. Also, with the rise of the app for installation and operating, the screen becomes largely redundant, which may turn some buyers off.

Naturally, we’ll have to get a unit in our hands, to test the WiFi range and speed claims, but there’s nothing to suggest that it won’t offer great performance. Yet again though, smaller properties can most likely do just as well with a standard router and smart home hub.

If you are starting out on your smart home, and sticking to WiFi products then the extra features of the Almond 3 range might not make much of a difference, and if you need to use the touchscreen, then you need to keep these units in sight, and they aren’t quite as stylish or as well designed as the likes of the Eero which is begging to be kept on show.

Product selection seems a lot simpler when there’s only one or two on the market. The sooner more choices arrive, the tougher things get, especially with many of them up for pre-order trying to push you to buy without a full range of reviews to compare against and often incomplete specifications.

The Almond 3 units look like the ideal choice for those already invested in a smart home setup. Supporting Zigbee out of the box and Z-Wave via a dongle. Of course, if you just a WiFi obsessive, you’ll have to wait until we get all these new smart home WiFi units in to test to find out which is the fastest and offers the most reliable connection. Stay tuned for those results.