The Amazon Echo first rolled out to Prime subscribers last year as little more than a Bluetooth speaker with a couple of ‘smart’ features. Since then, the team behind it has added many more features, until the device was recently considered worthy of a general release.

Powered by a cloud service called Alexa, the Echo responds in a female voice to your requests. While it started primarily as a music player, it can now handle requests for information, adding alerts to your smartphone, controlling some smart home features and much more.

In this review we are looking for usability of the key features and software, pros and cons when it comes to design, installation, and price. Let us know in the comments of your experience with the Echo.

Key Features of the Echo

Pros of the Amazon Echo

The Amazon Echo can listen with remarkable precision to your voice, picking up your requests from anywhere in the room, even if it is playing loud music at the time, thanks to its noise cancelling technology. You can also audibly command it to ‘pause’ or ‘stop’ when she’s responding.

It uses dual-band, dual-antenna Wi-Fi for a faster and more reliable WiFi connection, and responds at conversational speed to most requests. A2DP Bluetooth is supported so you can stream audio from your mobile device to Amazon Echo, so non-supported services like iTunes or Spotify can play through the speaker.

The remote control can act as a microphone if you go to another room, so you can keep up the conversation on the move. Alexa will store your non-immediate commands to the Echo app. She can add events, alarms, shopping list items and informational data for you to reference later.

Smart home owners will be pleased to know that a recent feature is the ability to turn off the lights on command. It looks like it’ll integrate increasingly with your smart home appliances, currently Belkin WeMo and Philips Hue are supported, with more to come.

Since one of the main features is playing music, you’ll be pleased to hear that the speaker provides 360 degrees audio with deep bass and detailed vocals. However, it won’t replace your home speaker setup.

Perhaps the best feature of the Amazon Echo is that it continues to get smarter. Regular updates are adding features all the time, and as it only needs the cloud side updating, you don’t need to do anything.

How long will it be until Amazon can order something you see on TV, or how long until it can unlock doors for people or order pizza directly? The future certainly seems bright for the device.

Cons of the Amazon Echo

On the negative side, the Echo needs power and WiFi to be useful, which limits where you can put it. There’s also no stand for horizontal usage or storage, so you can’t risk keeping it lower down near children or bouncy pets.

The Alexa service also favors Amazon’s own music services, so there’s no direct support for iTunes, which could be annoying for some. Another small issue is that Echo is currently only available in black, we’d like to see a white or silver model, which will probably happen soon.

You’ll also find that the speaker technology isn’t really audiophile grade. It is fine for casual listening, which I guess covers most buyers, but classicists will probably wait until Alexa is integrated into a set of Bose speakers (which could happen, hopefully).

When talking to Alexa, even though it is getting smarter, you will start to find the limitations more annoying, refering to Wikipedia all the time, or choosing the wrong sort of music. Having a Prime account is also needed to get the best out of her, which some may consider an unfair subscription.

Finally, this is currently a US-only product. The app isn’t available outside the US making the product effectively useless, and much of the information like sports scores is all US-centric. There is no word on any international release. 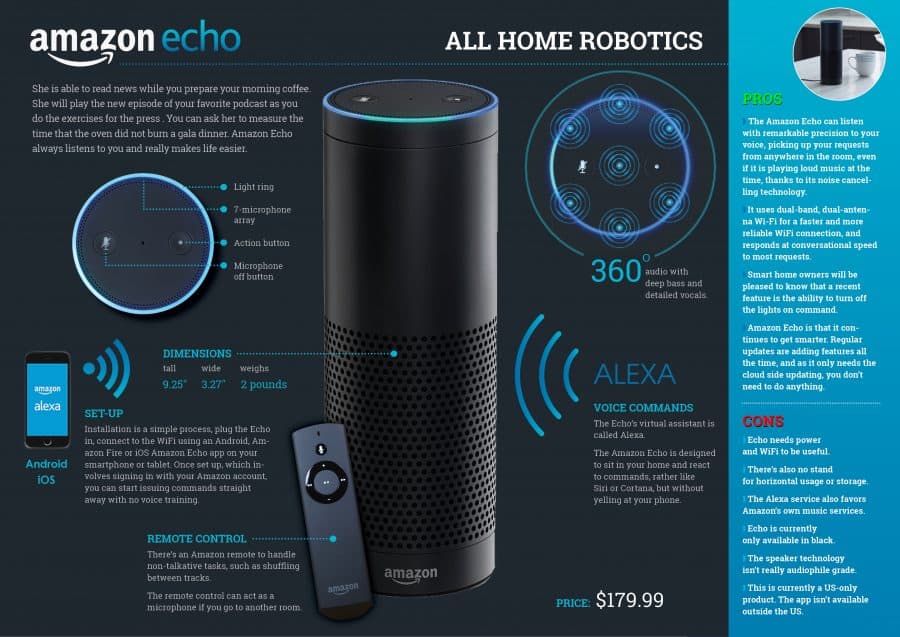 Final Recommendation – Is it Worth it Today?

As homes get smarter, we will need room-based devices like the Amazon Echo to interact with them. By starting out with the fun things like books and music, all family members can learn these interactions, and then move on to controlling smart devices.

More critically, it removes the need for us to be tapping away at a screen, or being always glued to our smartphones. When Amazon Echo eventually ties into your smart TV, we can also do away with the remote control. How’s that for progress?

Perhaps it is of most use to those who can’t get around so well, or are disabled. They can use Alexa for a huge array of commands, feedback and messaging. Many of the positive reviews for Amazon Echo come from people with limited mobility, who see real benefits from using it.

And, since this is an evolving tool for the modern and smart home, Amazon Echo will keep getting smarter, able to perform new tasks or handle new requests. I’d guess half the fun of owning one would be to find out what it can do next.

UPDATE: We have recently released a few comparison of the new Echo family of devices (to including “Tap” and “Dot”) and other competitors:

Depending on how smart you expect the Echo and Alexa to be will probably refine your expectations. She isn’t yet a home information or receptionist, and there’s a lot of other stuff she won’t do. But, as that technology and smartness is delivered, Echo could become the start of a beautiful smart home relationship.

Bottom line: This is an appealing product for geeks. It will likely only become more useful as smart homes become a reality. If you are already in the process of building out your integrated “smart ecosystem”, this is a worthy addition. She’s available on a discounted price here (as of this writing).