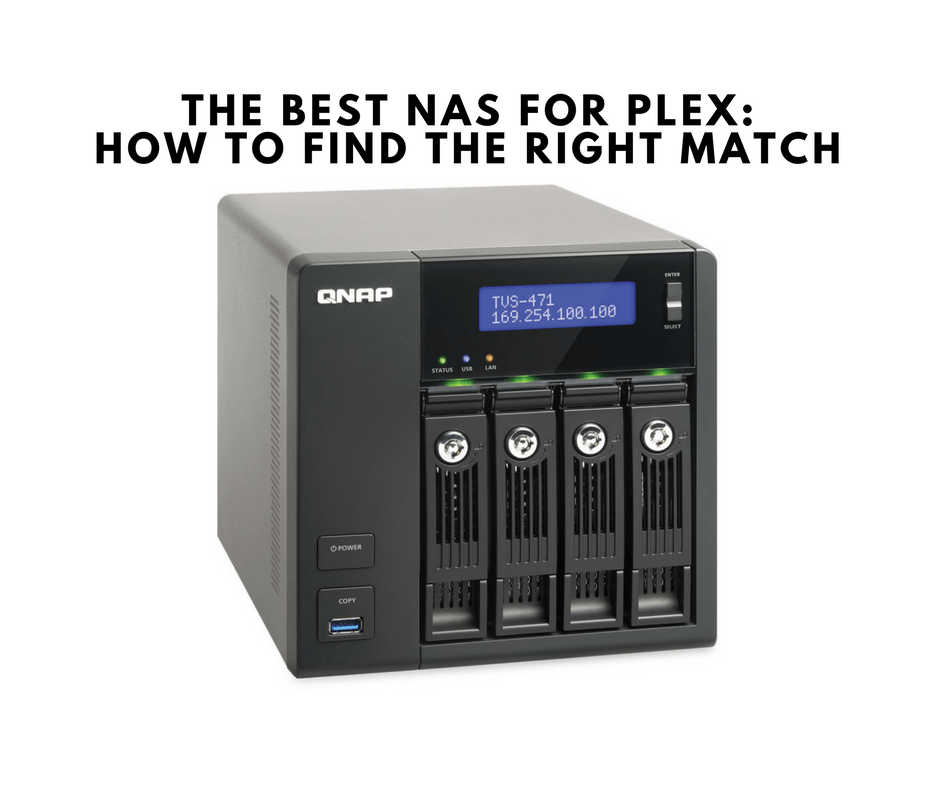 What’s cooler than setting up a Roku device to cut the cord from your cable provider and connecting to hundreds of streaming servers? That’s right, setting up your own private streaming media server! Anyone with personal digital media libraries should take advantage of Plex since it’s free to download. However, although the software is free, chances are you’re going to need to purchase a quality NAS device to host the Plex installation and store all of your media.

Before we get too far, I did want to take a moment to issue a slight warning. When setting up Plex on a NAS, you are essentially building a private streaming server (how freakin’ cool is that?!) instead of streaming multimedia from a third party service like Hulu. And wouldn’t you know it? Streaming video and multimedia content are incredibly demanding. It takes up a lot of space on a storage device, needs a fast and reliable Internet connection, and requires all the right codecs.

For these reasons, a cheap bottom of the barrel NAS device is inadvisable. Instead, you’re going to want to look at high-end NAS devices. Like anything else high end, some of the NAS devices are rather expensive. But if you’re a true-hearted tech-junkie and don’t want to sacrifice quality, then paying for some of these NAS systems isn’t that intimidating. If you’ve ever built your own gaming rig, the price of some of these NAS devices won’t seem quite so exorbitant.

What makes one NAS device better than another? Is one brand always better than another? Is it a roll of the dice to hope that your model doesn’t have manufacturing defects? Or is raw storage size the only concern? There are actually many factors I would recommend considering before making a purchase. But of these factors, I think the most important is capable hardware that meets Plex’s demands, followed closely by price.

You’re going to want a NAS with its own processor, and you’re going to want a dual-core processor at the very least, I would advise getting one with a quad core, but there are so many factors determining processor speed (clock rate, number of cores, pipelining, architecture, threading capabilities, etc.) that some high-end dual cores can outperform low-end quad cores.

Also, you’re going to want a NAS with at least 1GB of memory, but 4GB or more is preferable, and you’ll want to consider the NAS device’s network interface as well. I would caution you against purchasing a NAS device with a network interface that exceeds the capabilities of your router (unless you choose that particular NAS device for other reasons).

For instance, if your router only has Fast Ethernet ports (100Mbps), it’s probably time to upgrade. Just about all the modern and cutting-edge NAS devices have 10Gbps network interfaces, or at least Gigabit Ethernet interfaces. Ethernet standards are backward compatible, but it would be a shame to waste your NAS’s potential simply because you didn’t have a fast enough router.

The names of these NAS devices are atrocious, yet incredibly descriptive. As you may have noticed from this model’s name, this NAS system houses an Intel Core-i3 Dual-Core processor, and each core runs at 3.5GHz. Better yet, it comes loaded with 4GB of DDR3 memory, which has a maximum expansion threshold of 16GB (not too shabby).

This beastly behemoth comes with four massive drive bays for a whopping total of 64TB (that’s 65,536 gigabytes!) of storage capacity. And as far as video streaming, it’s got all the bases covered. Not only does it come with 4K video playback support, but it also supports 1080p high definition transcoding, so you’ll never have to worry about poor video quality.

The only other core feature I haven’t mentioned yet is its network interface. And let’s face it, your NAS needs a lightning fast network interface to support massive data transfers and video streaming. Fortunately, this model comes with a 10 Gb (that’s gigabits per second and not gigabytes per second) for the latest and greatest network throughput, though your local router will need to have 10Gb interfaces to obtain the full benefits.

What’s the downside, you ask? Only the price tag, which made me cringe a little. It costs a great deal of smackeroos, which might deter all but the most addicted media junkies from committing to a purchase. Still, I did want to showcase this model as the cream of the crop. 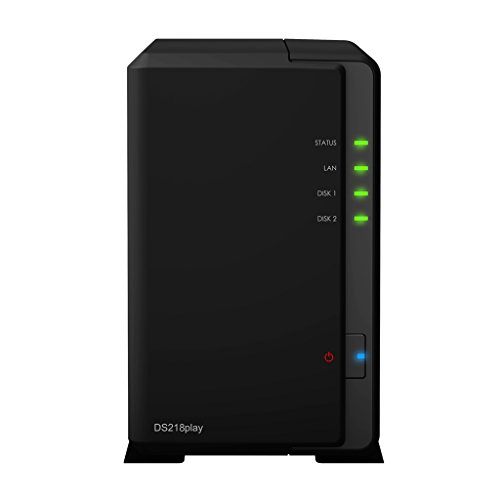 Completely opposite to the previous model is the Synology DS218play. What the QNAP model boasted in power and cutting edge features is absent in this Synology model. It’s really more of an economical and entry-level NAS device designed to provide the bare minimum amount of hardware while still being adequate and functional.

It’s a rather basic model, but I bet you know what that means: it’s much more affordable. In fact, this model only costs a fair amount, which is a drastic improvement over the previous model. Despite its low price, it still has 4K Ultra HD capabilities at 30 frames per second. Furthermore, it also supports H.265 HEVC for high-quality video streaming.

However, it has decidedly fewer features than the other models. For instance, it only has two drive bays, and comes with only 1GB of DDR4 RAM. But I was happy to see that it had 64-bit 1.4 GHz quad-core processor. All in all, I think it delivers a great value considering the cost/hardware ration, though it certainly isn’t the best of the best. 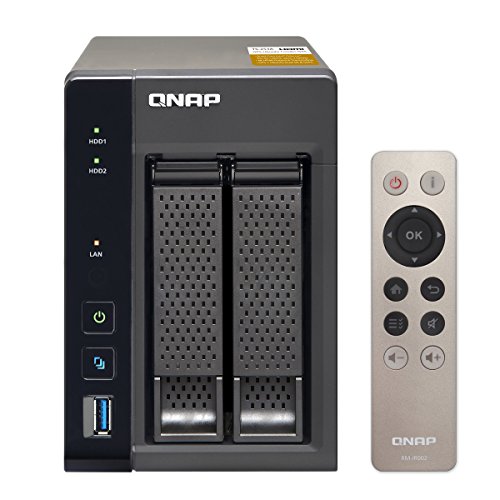 Next up is the QNAP TS-253A, which offers the best of both worlds in terms of cost and hardware quality. It’s really more of a mid-market solution that offers the best value and improves on the previous model in several key ways. First of all, it has four times as much memory as the Synology model. This QNAP model comes with 4GB of DDR3L RAM (which can be expanded up to 8GB maximum), though it still only has two drive bays.

Additionally, it comes with an Intel Celeron Quad Core 1.6GHz and two Gigabit Ethernet ports for redundancy. I do wish this model had 10Gb Ethernet, but given that most folks don’t have 10Gb Ethernet capable routers or network devices, I think the 1Gb ports will suffice. And interestingly enough, it comes with some virtualization software via the Virtualization Station and Container Station to help divvy up storage among virtual machines.

It also supports 4K video and the H.264 standard for high-quality streaming and is fairly affordable. It costs less than the price of a quality new computer or laptop at a decent amount. Not bad when considering that some of the highest end models cost thousands of dollars. If you’re looking for a great mid-market Plex system, it’s hard to beat this model. 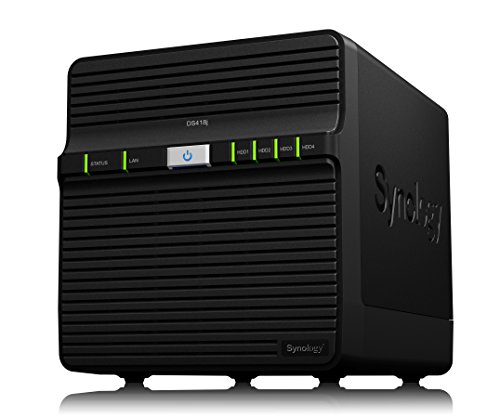 Yet another fantastic mid-market alternative is the Synology DS416j Disk Station, though you can find deals on used models. Personally, I prefer new out-of-the-box systems since they’re protected under the manufacturer warranty and because they haven’t been mishandled. At any rate, this model comes with four drive bays and a dual core CPU.

Internally, it can read and write unfathomably massive amounts of data incredibly quick. Naturally, the read speed outperforms the write speed, but it can read 112.82 MB per second and write 101.2 MB per second. Honestly, I think the read speed is more important when looking at things from a streaming perspective, though a fast write speed is great for loading it up with digital media.

Furthermore, it comes with USB 3.0 for faster data transfer speed and can handle up to 5 Gbps data transfer (as long as the other system/drive is capable of those speeds as well). It is compatible with 3.5” Sata III and Sata II drives, and it comes with optional 2.5” compatibility, which is great for the small laptop drives. All in all, this model is a great blend of high performing hardware (yet not the best) and a decent price.

If you think you can run a Plex installation from a crummy external HDD, think again. It takes a lot of storage and processing power to effectively run your own Plex build. Instead, you need a full featured NAS device, which is effectively a full blown storage server with its own network interface, memory bus, processor, and hard drives.

Some of them are incredibly expensive, but I think you could realistically expect to pay in the ballpark of its price to do your Plex software justice. From my perspective, that’s incredibly affordable when considering that commercial servers cost many times that amount. Last but not least, consider upgrading your router if it’s old and dusty. Remember that your router needs to have Gigabit Ethernet or 10 Gigabit Ethernet ports to support maximum data transfer speeds with your NAS.

Further read, Believe it or Not: These Plex Alternatives Are Actually Better!