Wi-Fi doorbells come with all the bells and whistles you would expect, allowing you to view and speak to visitors through your smartphone or a tablet.

The ability to see and hear people approaching your property from your device has a number of obvious perks, and video doorbells often come with night vision and the option to record when a motion sensor is activated.

The devices use Wi-Fi to bridge a connection, and lag is usually minimal. It means that users can answer the door from nearly anywhere in the world, and it could change the way you control doors and cameras outside the home.

Installation can be performed independently or by an expert if you’d prefer, and many models allow you to connect it up to your existing smart security systems. Let’s take a look at three of the best WiFi video doorbells;

The SkyBell doorbell is a well-known brand, offering everything you would expect from the latest range. The HD version is slightly pricier, but that’s reflected in the quality of the camera. It offers color night vision, as well as HD 1080p footage with zoom capabilities. 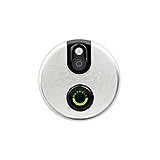 It’s a small device, rounded off at 2.8 inches, while it’s 0.9 inches wide. Setup is easy enough, and the wall mount is included in the purchase. For more information about installation and power SkyBell have an additional FAQ available here.

Designed and made in the USA, it’s reasonably sleek, although the logo itself is noticeable from a distance. It doesn’t ruin the overall package, but it does stick out like a sore thumb thanks to the shocking green on the main button.

It’ll work with iOS and Android, and there’s the added bonus of being able to access the camera at all times via your mobile device. The SkyBell is one of the best buzzers you can buy. You can make multiple user accounts, but only one person will be able to access the video feed at a time.

If you’re interested in an older model, here’s my review of the cheaper SkyBell 2.0 version.

This is one of the most popular options on Amazon, and comes with four different color schemes to choose from. It actually looks a lot like a traditional doorbell, which means it’ll fit in more subtlety if you prefer an understated look. 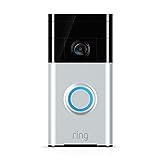 It has built-in night vision and Smart Motion Detection, which sends out mobile alerts when the sensors pick up movement outside. It’s great to use as an added layer of security, and it’s compatible with Android and iOS. (As long as the notifications don’t get buried under everything else while you’re busy.)

Despite a few mixed reviews, there’s a reason why so many people have gone for the Ring option. For an in-depth review of the Ring, check my guide that discusses the key pros and cons at length.

(It also comes with lifetime purchase protection, should anyone decide to make off with your precious tech.)

(This home security camera system has many of the features you would find on a smart doorbell, so it could be suitable for your needs.)

As the cheapest option of the three, the  Blink buzzer is still able to keep up with the big boys for the most part. It definitely looks like smart technology, although it isn’t very pleasing on the eye. The black camera is especially prominent because of the white shell, and it’s the cheapest looking of the trio. 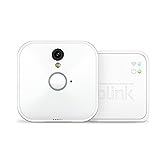 It comes with an additional wireless camera that runs on AA batteries, and you can purchase more cameras if you want to combine your doorbell with a HD security system. Batteries as a power source won’t be for everyone, but it’s good for people who want to keep an eye on multiple spaces around the property.

If budgetary constraints are your main issue, there are a number of smart doorbells that hover around the same price point. The wireless features make it stand out, and it does nearly everything you’d find on the others on the list. It makes for a worthy addition to this top three list.

For non-US residents, you’ll be happy to know that it’s available for shipping from Amazon to locations like the UK. If you can deal with 720p, it’s a great example of the cheaper options available on the market.

(However, it doesn’t have two-way audio, so you’ll have to make do with video streaming and motion detection to note when visitors are near.)

Well, as always, it depends on what you need. If video clarity is most important to you, the SkyBell model is one of the best available on the market, so we’d suggest that you give it a try if money is no object.

Color night vision is an added bonus for the SkyBell, but If you have a slower internet connection or strict data usage limits it’ll probably be better to get a camera that records at a lower resolution. It’s still easy enough to recognize anyone that comes over as long as you get doorbell with a half decent  camera.

So, which is the best of the three options discussed above? Each have their own pros and cons, but they’re all capable of helping you keep an eye on your property. If I had to pick one, it’s hard to do better than the SkyBell.

If security is your main concern, it might be better to go for a smart home camera system instead.

Is it worth upgrading to a smart doorbell?

Obviously it depends on your budget and personal preferences, but it can save you time and effort in the grand scheme of things. If you have a stable internet and you have regular visitors or deliveries, it could change the way you meet and greet people, saving time and effort.

If you have a number of properties, it’s a clever way to keep tabs on comings and goings, although it might be a better idea to combine a mix of technology if you want smart cameras and a smart doorbell.

It’s not for everyone, but it’s clear to see how it can be helpful depending on
the circumstances. 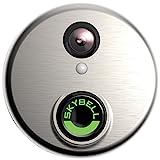 Will it work with my current security setup?

It’ll depend on what you already have, but it’s possible to combine different types of technology by using your smartphone and apps.

You could invest in a solid smart lock if you want to be able to let people in while you’re out of the home, while a combination of both smart lock and doorbell could be useful if you want to go down the fully automated route.

It’s an upgrade on the traditional experience, but more importantly, it’s safer.

When is a doorbell not a doorbell? When it’s ajar. (Sorry.)

It’s clear that automation has come on in leaps and bounds, and you can now answer your door from anywhere in the world. Motion detection and video feeds can help you to stay aware of any potential intruders, while combining technology allows for even more control.

Security risks will always be a worry, such as the exploit that allowed people to find out your SSID and PSK (potentially giving them control of your network) by removing the Ring Doorbell and opening it up.

Pen Test Partners found out about the exploit, although they noted that Ring responded instantly, fixing the vulnerability just over two weeks after it was originally disclosed. (Between various white hats and in-house teams, there are lots of people working on staying one step ahead of any hackers.)

Smart Doorbells are one of the best pieces of smart technology since window cleaning robots, and they’re likely to get cheaper in the future. Nonetheless, that shouldn’t stop you from taking the plunge if you’re interested. You’re unlikely to be disappointed when somebody comes knocking for the first time.