Robot vacuums have been around for quite some time now and innovations or improvements have focused more on the cleaning technology involved, the brushes used, and other advanced cleaning features.

Nothing really groundbreaking was introduced of late, until the addition of a camera and the ability to be able to remotely control a robot vacuum.

Two models with these new features are the Roomba 980 and the Dyson 360 Eye. 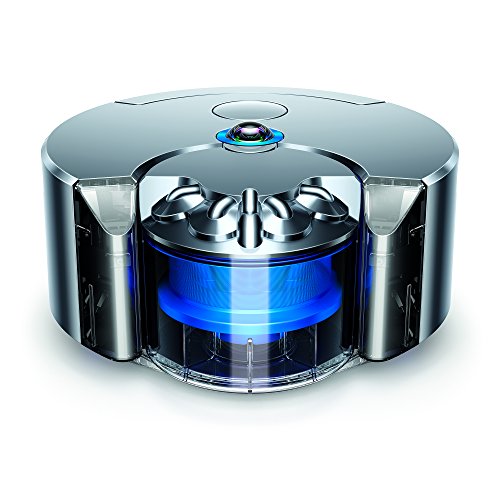 Same Roomba Look: While the Dyson 360 Eye looks different from earlier robot vacuums released by the company because it is taller, the Roomba 980 looks very similar to all other Roombas.  The Roomba 980 has a camera, but it is not that noticeable.  From the bottom, you would see the same AeroForce extractors that you have seen in the Roomba 800 series, particularly the Roomba 880.  It still has the big dust bin and the HEPA filters.

Side by side comparison: Dyson 360 Eye and iRobot Roomba 980

Before you start comparing the two, it is best to see the specifications for both the Dyson 360 Eye and the Roomba 980:

Single Charge Cleaning Time: The Roomba 980 cleans more than 2.6 times longer on a single charge, compared with the Dyson 360 Eye.  However, it does need 180 minutes to recharge while the 360 Eye needs only 165 minutes.  That means that in seven hours of cleaning, the Roomba 980 would have cleaned for four hours while charging for three hours, and the Dyson 360 Eye would have cleaned for only 1.5 hours for 5.5 hours of charging time.  If you have big rooms or a lot of rooms to clean, prepare to wait longer with the Dyson 360 Eye.

Logistical Concerns: The Dyson 360 Eye does not use an HEPA filter, which is a standard among higher-priced Roombas.  It also has a dust bin with only nearly half the capacity of the 980’s bin.  The Dyson bin is also not as accessible as the Roomba 980’s bin.  Additionally, the Dyson 360 Eye is taller than the Roomba by a little more than an inch, which means that it has more difficulty going under furniture and cannot clean areas with very low vertical space.

Dimensions: The 360 Eye is much lighter than a Roomba 980 and is close to 5 inches smaller in diameter, thus allowing it to clean within tighter spaces.  It also offers more lively color choices: blue or fuschia, fused with elegant nickel.

Tank Treads: Another Dyson 360 Eye feature worth mentioning is the treaded wheels that are able to go over bigger obstacles such as a thicker power cord that would trip and trap a Roomba.  It can also move from carpets to hardwood with ease.

A Better App? Furthermore, it is easier to work with the Dyson Link mobile app than it is to control your Roomba with the iRobot Home app.  For one, there is a delay when you press the Clean button on your Home app.  A good 10 seconds would pass before the Roomba 980 would start to move, sometimes even longer.  If you have problems with your connectivity, you may end up with repetitive cleaning jobs.

Are Dyson Robot Vacuums Worth the Cost?

Dyson robot vacuums can clean on hardwood, carpet, and many other flooring types. They pick up pet hair, clean quietly, and get the job done without a lot of fuss. They are a little more costly, but for what you’re getting, the Dyson 360 Eye is one of the better robot vacuums available.

Can the Roomba 980 Learn Your Floor plan?

The Roomba 980 uses updated iAdapt 2.0 technology, along with a pair of highly sensitive sensors to learn the floor plan of your home as it vacuums. It will remember the layout of each room, along with where your furniture is placed, so it will know exactly where to clean during its cycle.

Can I Leave my Dyson 360 Eye on the Charger?

Yup, you sure can. Leaving your Dyson 360 Eye on the charger all the time won’t impact the life of the battery at all. Once it gets to a full charge, the device will automatically switch over to idle mode. That means it can stay on its dock – and out of your way – anytime it’s not cleaning.

Will the Roomba 980 Empty its Own Dustbin?

While there are a few models on the market that come with this functionality, unfortunately, the Roomba 980 is not one of them. It can map the layout of your home and keep your floors clean, but when it’s finished with its cycle, you still have to empty the dustbin manually.

There is no question that both the Dyson 360 Eye and Roomba 980 can get the job done.

The Dyson 360 Eye can deliver an impressive cleaning especially when you compare it with older robot vacuums.  It has a very powerful suction and can leave your floors cleaner.  So much so that you might be disgusted to see what you have in the dust bin.  Its cleaning path is not haphazardly laid out and you can see this on the mobile app.

The mobile app is pretty straightforward without the bells and whistles.  Everything is kept simple, so do not expect to use the mobile app to remotely control the robot.  Instead, you get a clean interface that allows you to do the basics: stop, pause, start and schedule a cleaning.

That said, the Dyson 360 Eye might not be a good fit for homes that have low hanging furniture because it stands higher than most robot vacuums.  It will also not be a good idea for larger homes as it has a very small dust bin that fills up easily.

Meanwhile, the Roomba 980 does deliver the same degree of cleaning as the Dyson 360 Eye.  But if you are more interested in being able to remotely control your robot from outside the house, then it will somewhat disappoint.  Still, it is cheaper alternative than the 360 Eye, while delivering a faster cleaning job.

As far as cleaning technology and how thorough each one cleans, there is no clear winner.  While the Dyson 360 Eye has a stronger suction, the Roomba 980 has a three-stage cleaning system that more than makes up for its weaker suction power.  Also, while the 360 Eye has a shorter battery life, it needs only one pass to clean as much as the Roomba’s multiple passes.

Both the Dyson 360 Eye and the Roomba 980 can easily find their way back to the charging station and recharge themselves when their batteries run out.  That means that if you are just going to schedule it to clean by itself, by the time you get home both would have done the job right.

Both have cameras that help them plan their respective cleaning paths and help the vacuums clean more thoroughly.  Furthermore, these vacuums bring you a very exciting development that could mean more features and functionalities in the near future.

Bottom Line: Who is Each Best For?

here if you have a relatively simple floor plan and need powerful single run suction (no time for multiple passes).

if you want to get UNDER furniture, a larger (more complex) floor plan, don’t mind persistent passes (maybe you are out during the day when it cleans), and want to save a little bit of money.

Need more information? Check out our full list of the top Roomba models!