Home security cameras have come a long way in the last few years and at a glance, it’s often difficult to decide which camera is the best choice for a given application.

Many of these cameras have similar features and specs and are often priced very competitively, making it even more difficult to choose the right camera for your surveillance needs.

It gets even more complicated when one manufacturer buys out another – offering two products that are nearly identical except in name.

When Nest recently acquired Dropcam for $555 million, for instance, Nest decided to keep the Dropcam on the market while simultaneously offering the Nest Cam, a product that is almost identical with only a few minor differences.

Foscam is another favorite security camera with consumers and in this article, Foscam is compared to the venerable Dropcam Pro.

Which of these two surveillance accessories is truly the best bargain for the money? Read on to find out… 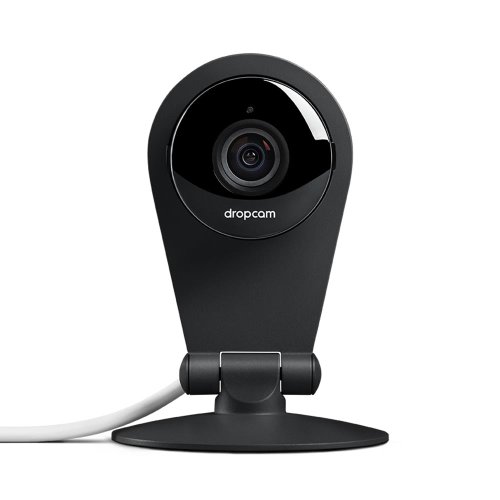 The enhanced visual quality of the Dropcam Pro is way ahead of both its predecessor and most of the other home surveillance cameras on the market – despite the fact that Dropcam Pro does not have pan and tilt functionality.

The wide angle lens of the unit (130° compared to only 107° in the original Dropcam HD), combined with the digital zoom, allows users to see anything in a room without the need for more expensive and complicated pan and tilt functionality.

Size: Measuring in at 4.5” x 3.15” x 3.15”, the Dropcam Pro is small enough to stash just about anywhere (this measurement includes the stand). Without the stand, the puck-shaped camera can be discreetly placed although mounting it properly can prove to be rather difficult.

Wireless: Dropcam Pro does not have an Ethernet port but it does provide a unique feature that eliminates the need for an Ethernet port to begin with: dual band wireless technology. Dropcam Pro will automatically choose either 2.4GHz or 5GHz (if available) during the initial setup of the device.

Although the range of 5GHz wireless is slightly less than 2.4GHz technology, the increased bandwidth of 5GHz is perfect for streaming the HD video recorded by the unit.

App and Web Enabled: Dropcam HD works with every major Web browser as well as the mobile apps available for both iOS and Android.

Even though digital zoom looks awful in most applications, the digital zoom of the Dropcam Pro uses a special enhancement algorithm (accessed by clicking on the magic wand in the mobile app) to provide an extremely clear image even when zoomed to the maximum 8x.

Cameras Sensor: The camera sensor is massive on this device which allows for excellent video, even at night. Using only 8 IR LEDs (the previous version had 12), the night vision capabilities of this camera are impressive to say the least.

Power Source: Perhaps one of the only caveats of the Dropcam Pro is that there is no integrated battery option.

The unit is powered by a USB cable. In defense of the unit, adding a battery would significantly increase the size of the camera (not a good thing) and the fact that it runs off of a standard USB cable means that consumers can opt to purchase a USB-compatible external battery pack if desired.

Cloud Based Recording: Dropcam Pro also offers a cloud-based recording service known as CVR that can be purchased for a monthly fee. This service, which is also available for Nest Cam, is rather pricey but allows for either 10 day or 30 day cloud recording.

These videos can be viewed online or even downloaded to a local computer (Dropcam Pro doesn’t have onboard storage capabilities).

Size and Setup: The Foscam FI9826P is a rather heavy camera available in either black or white. The camera can be setup wirelessly using Wi-Fi Protected Setup (WPS). If your router doesn’t support WPS, this camera must be setup using a standard Ethernet cable instead.

App and Web Enabled: Like Dropcam, Foscam relies on a mobile app called Foscam Viewer which is available for both Android and iOS devices. Once the mobile application has been installed, the camera is registered to the app using a unique username and password combination.

The mobile app allows users to access live streaming in either single or quadrant view (only if running multiple cameras via the same router). The app also allows for video recording, taking snapshots, and pan, tilt, and zoom functionality.

Two way talk is also accessible from the app although this function did not work very well during product testing.

Core Camera: The camera itself leaves a few things to be desired when compared to Dropcam. Foscam’s field of view, for instance, is limited to 35° – 70° (Dropcam boasts 130°). Also, the video quality of the Foscam sensor is rated at 960p – not bad but not the full 1080p HD quality offered by Dropcam.

On-board Storage: Where the Foscam outshines the competition is in its onboard storage. Foscam provides a SD card slot for local storage of snapshot and video recordings whereas Dropcam forces users to purchase a cloud-based storage subscription to save any recorded footage.

Foscam also allows for pan, tilt, and zoom control from the mobile app – a function that Dropcam failed to implement in its latest product offering.

Which One is Better? Foscam or Dropcam? 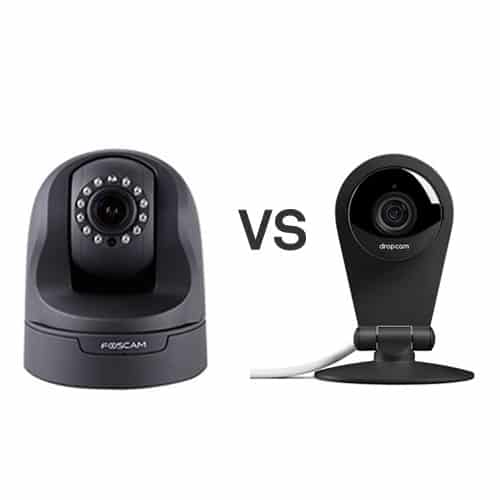 The Dropcam is definitely a more expensive option.

However, each camera offers users a distinct set of advantages over the other so choosing the better camera comes down to exactly what you expect the camera to do in the first place.

If you are looking for the best possible image quality, easy setup, and the ability to store video feeds to the cloud from anywhere in the world, Dropcam Pro.

If, however, you value the ability to pan, tilt, and zoom the camera from your mobile device, Foscam is the better option considering that this is one feature where Dropcam is seriously lacking.

While both cameras are a good choice when adding surveillance equipment to your home or office, Dropcam offers more features in a much more intuitive package than Foscam for the money.

While the absence of local storage and manual camera controls give Foscam a slight edge, the honor of best value for most people is Dropcam.

This is especially true since Nest purchased Dropcam because Dropcam can be integrated into a complete Nest home automation system – a claim that Foscam simply cannot make as of this writing. 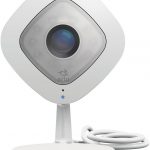 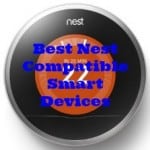