Do-it-yourself home security systems are becoming more and more popular nowadays.  These systems are much more flexible and you can customize them according to your needs.  If you have a large house, you can add more sensors.

If you are paranoid about burglars coming in, there are security systems that include motion sensors and loud alarms.  And if you are more concerned about smoke, flooding, fire, and other potential dangers inside your home, these security systems also have sensors for them as well.

Two of the best DIY home security systems right now are Simplisafe and GetSafe.  Both systems are easy to install and set up, and are similarly easy to expand.  You can add more sensors to basic starter packs and get it all running in just minutes.  Moreover, because these systems and their devices are wireless, you can place each sensor wherever you want and not worry about wiring around the house.

If you are looking for a home security system, then read on to find out which between GetSafe and SimpliSafe is the best for your home.

SimpliSafe is one of those DIY security systems that allow you to use different sensors together to secure your home.  It uses several devices, which are wireless and easy to install. 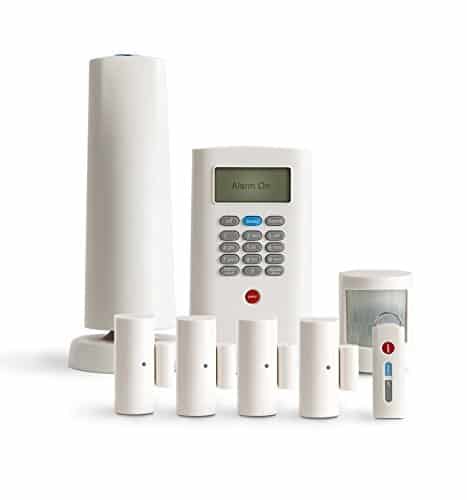 If you are looking for a security system that is easy on the budget and flexible, then Simplisafe is a good choice.  The company does not try to lock you in with annual contracts and you can add more sensors, and even a security camera, as you need them.  SimpliSafe offers you an easy-to-use system that is very capable.  It also has cellular connection, which means that it can still send SMS and e-mail alerts even when the power gets cut off.  It also has backup batteries.

How does Simplisafe compare to other security systems?

How does GetSafe compare with SimpliSafe?

Simplifsafe is Cheaper: One of the things that you would notice about GetSafe is that it offers a starter kit, while SimpliSafe has a similar package that cost less.  As far as equipment pricing goes, it would seem that SimpliSafe offers the better deal.

Simplisafe has Cheaper Components: This is also seen in the different sensors that are offered by both companies.  Apart from offering more sensors such as the carbon monoxide sensor and the freeze sensor, SimpliSafe also sells other sensors with more affordable prices.  Some sensors from SimpliSafe are cheaper than those from GetSafe.

On top of the equipment, SimpliSafe also has lower monthly fees.  Both GetSafe and SimpliSafe allow you to use their system without subscribing to any contracts.  That means that you can enjoy their system without paying anything.  However if you want professional monitoring, you would need to pay for standard monitoring anda bit more for interactive.  GetSafe offers professional monitoring for a little higher price.

If you find this too limiting, then GetSafe has good news for you.  If you opt for an annual plan, you can get the equipment free.  This is something that SimpliSafe does not offer.

Another point for GetSafe is that it looks much better than SimpliSafe, which honestly looks boring with its white devices and a clunky wireless keypad.  GetSafe does not have that keypad and you control everything on your mobile app.

A side-by-side comparison of GetSafe and SimpliSafe should make it easier for you to compare their features:

The final word: SimpliSafe vs. GetSafe

There is no contest that SimpliSafe and GetSafe are two of the best DIY security systems available right now.  If you are looking for a no-fuss and affordable way to secure your home and you do not have smart devices at home or is currently not planning to build a smart home, then look no further than SimpliSafe.

SimpliSafe is also cheaper (see here!) and has sensors that would protect your home from any element.

However, if you have a smart home, GetSafe (read my full review here!) is the best one to choose because of its Z-Wave compatibility.  You would have to be prepared to shell out more for the devices and the professional monitoring, especially when compared to SimpliSafe.  In short, you pay a premium to avail of Getafe’s connected-ness.

Which Do I Personally Prefer? I don’t have much tolerance for smart devices that can’t communicate with others. Personally, this is the main reason I would opt for GetSafe over SimpliSafe. Bottom Line is that GetSafe offers more compatibility and a robust IFTTT recipe list, while SimpliSafe is only a good option if you don’t need the smart connections.

Bottom Line: Go with GetSafe here if you are keen on building a smart home that functions smoothly together.