Home automation technology is becoming increasingly popular among consumers, whether these individuals consider themselves to be tech-savvy or not.

Everything from smart thermostats to refrigerators that notify you when the door has been left open are finding their way into homes around the country and around the world.

One of the latest trends in home automation has been the introduction of complete home automation solutions that control multiple aspects of your home from a single control panel.

In this Lynx Touch review, I’ll break down the key features and how it performs in each key category.

Overview of the Lynx Touch 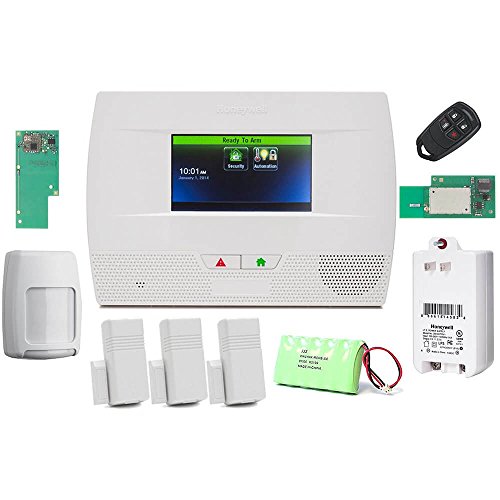 The Honeywell Wireless Lynx Touch L5200 is a complete home automation solution that features a 4.7” color touch screen. Once properly setup and configured, the L5200 allows you to control the alarm system, locks, lighting, thermostats, and more from anywhere in the world using your smartphone.

Devices: Practically any type of home automation sensor, night cameras, and alarms can be added to the base system although the basic Honeywell package only comes with a motion sensor and door or window contact sensors.

Honeywell also offers an optional monitoring service. Again, this service is optional but it is very easy to setup with the monitoring company and it kept a strong signal throughout testing.

Display and Video: The touch screen display is bright and easy to read. Intuitive prompts and graphical icons allow users to breeze through the menu prompts quickly and without confusion.

Smart Integration: When combined with the Z-Wave connectivity module, the L5200 can be integrated with automated lighting, thermostats, locks, water valves, and pretty much any other home automation technology currently available.

Support Plan: An upgrade to the support offered by the L5200’s predecessor, the new unit, when combined with the Z-Wave connectivity module, can support three separate garage door zones, up to three thermostats, four wireless locks, as well as 4-D light switches (including switches, dimmers, receptacles, etc.)

64 Programmable Zones: Unlike the previous version of the Lynx, the L5200 is capable of supporting up to 64 programmable zones, one hard wired zone, and as many as 16 key fobs. The L5200 also supports up to 32 individual user codes (the L5100 only supported 16 total).

This unit is also capable of controlling up to six temperature zones independently and it can store up to 128 events using its onboard memory.

Video Feeds Available: One of the other new features that Honeywell introduced with the L5200 is the ability to watch video feeds directly from the LCD display on the wall unit.

It’s worth noting, however, that this function only works with AlarmNet IP cameras or any security camera that is connected first to the Honeywell AlarmNet Analog Converter Unit, or ACU.

The primary selling point of the Lynx Touch L5200 is that it is completely wireless. For the DIYer, this means no wires need to be run through the walls for the unit to communicate with the home automation equipment installed in the home.

Unfortunately, the control unit is not plug and play which means users will have to spend some time “teaching” the sensors and the remote. Once everything is properly synced, however, operation of the unit and any attached devices is simple and straightforward.

Perhaps the only part of the installation process that isn’t exactly user friendly is that Honeywell neglects to include a necessary cable that connects the control panel to the included transformer.

At this point, the user has two options: 1) purchase the Honeywell LT-cable or 2) use regular alarm wire to make the connection.

The Honeywell-branded cable includes a DC plug so it can connect directly to the power supply input located on the control panel. This certainly the easier option although it is slightly more expensive than purchasing alarm wire and creating the connection on your own.

The L5200 does not include any cameras although Honeywell does offer three camera models that are compatible with the system. That said, any security camera will work assuming it is compatible with and configured for use with the Honeywell Total Connect system.

The use of this system does require an account and an associated monthly subscription but this functionality is necessary should you want to do anything more with the unit than monitor your doors and windows for break-in attempts.

Speaking of alarms, the control panel includes a siren that is 85 decibels. While this is certainly loud enough to alert people within the home about an alarm condition, it is very unlikely that anyone outside the home will hear the siren.

Honeywell does offer a secondary wireless siren that produces a 95 decibel alarm and because it is wireless it can be directed to an area outside of the home where it is more likely to be heard by neighbors.

The L5200 also includes a battery backup system that, during testing, was capable of maintaining control unit power for about four hours if a power outage were to occur.

The motion sensor that comes with the L5200 is a PIR sensor – in other words, the sensor works by detecting changes in body heat. With a sensing range of 35 x 40 feet and a horizontal angle of 90°, this sensor is capable of covering even large rooms once properly mounted in the corner.

One of the nice things about this sensor is that it will not detect pets that weigh under 80 pounds. This allows the user to set the alarm in “Away” mode while still allowing small pets to roam around the house without activating the alarm.

The Honeywell Wireless Lynx Touch L5200 is a formidable all-in-one home automation solution that can make your entire home a smart home in just a few hours.

The unit is affordable and because the entire system is modular, you can build upon the basic system as your budget allows (see here for the latest pricing).

Pros of the Lynx Touch

Cons of the Lynx Touch

The modular design of the system allows homeowners to scale up the home automation technology controlled by the L5200 as their budget allows.

And with the ability to connect up to 64 Z-Wave compatible devices, it is unlikely that the average homeowner will run out of home automation options with this unit any time soon.