Hoover is a trusted name in vacuum cleaners, which is why it is not surprising that the company would also try to lord it over in the robot vacuum space.

It has since launched a variety of robot vacuums, including the Rogue 970, which brings together Wi-Fi connectivity, voice commands, and the company’s signature Tri-Clean System – allat a very low price. 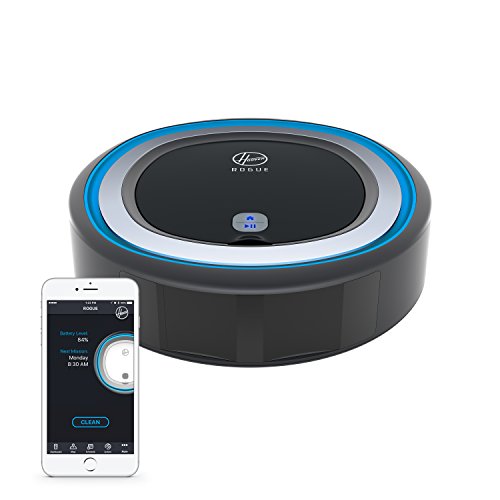 The Rogue 970 has the following features:

Robart Technology with Memory Navigation.  The Rogue 970 has laser mapping technologies that enable it to create a map of your floors.  This, in turn, allows the robot vacuum to move around the entire room effortlessly and clean it more comprehensively.

The robot vacuum can create its own cleaning path with the layout of your entire room in mind, rather than just randomly bump its way around, or go in a straight line until it hits an obstacle and then change into a random direction.  Not only does the Rogue 970 move with a purpose, it also remembers your floorplan.

SmartWall Technology.  Navigation control helps keep your robot vacuums inside the rooms that you want it to clean, or help keep it out of areas that you do not want it to enter.

With other robot vacuums, you can set up a separate navigation control device such as the Roomba’s virtual walls, or you can roll out strips of dark tape on your floors like the Shark Ion Robot’s BotBoundary strips.

Worse comes to worst, you must remember to close doors or put some obstacles to block the robot vacuum’s path.  With the Rogue 970, however, it becomes a whole lot easier to tell it where not to go.

With the Rogue 970’s laser mapping technology, you can view a map of your floors on the smartphone app.  If there are areas in the room that you do not want it to go, you simply create Smartwalls with a few simple steps.

You can block off an entire doorway, making sure that the Rogue 970 does not go out of the room or does not enter another room.  You can also block off an area within the room where you do not want it to clean, like perhaps your pet’s food bowl, or your kids’ play area where there are a lot of small toys.

Voice control.If you have Amazon Alexa or Google Home Assistant, you do not even have to pick up your smartphone to start a cleaning session. You can use voice commands to tell your robot vacuum to get started!

Tri-Clean System.  The Rogue 970 makes use of both a side brush and a main rolling brush that help agitate, loosen, and sweep dirt and dust.  The robot vacuum also has a powerful suction to send all the collected dirt into the 0.6 liter dustbin.

You can use the mobile app to create schedules for your robot vacuum, tweak the settings, get reminders on maintenance, get tips, view the user manual, watch how-to videos, or read the frequently asked questions for your device.

The mobile app also allows you to interact with the Rogue 970 even when you are not at home, or are halfway around the world.  You can remotely start a cleaning session or tell it to go back to its dock.

Dirt Detection.  Using sensors, the Rogue 970 knows if there are dirtier areas around your floors.  If it sees a spot on your floor that needs more attention, the robot vacuum will slow down to make sure that the brushes can sweep more on that area.

Lithium ion battery.  The Rogue 970 uses a rechargeable lithium ion battery that gives you a run time of up to two hours.  Once the battery levels run low, the robot vacuum will automatically go back to its dock to recharge.  Charging time takes up to three hours.

The Rogue 970 packs in a lot of awesome technologies, such as laser mapping, dirt detect, voice control, and Wi-Fi connectivity.

Not only that, the little things, such as having a two-hour runtime, auto recharging and Tri-Clean system, would really remind you of more expensive robot vacuums like the Neato Botvac D3, the D5 Connected, the Botvac 85, and the Botvac Connected.

These Neato robot vacuums sell at an expensive price. The Rogue 970 has a very wallet-friendly price (check here for the latest price).

Setting up SmartWalls can be made easier by allowing you to just draw on the map that you see on the mobile app.  This would have been much simpler to do and would have given you a finer grain of control, rather than tapping a number of buttons and then adjusting the end points one by one.

The first thing that you would notice about the Rogue 970 is how bulky and how plain-looking it is.  With a black plastic casing and a blue and silver ring, you will never guess that this robot vacuum packs a lot of serious technology in it.

The Rogue 970 is not recommended for high-pile carpeting and has problems with power cords and other low lying obstacles.  Power cords are a problem for other robot vacuums, but it is more pronounced for the Rogue 970.

The biggest stumbling block for the Rogue 970 is the mobile app experience.  The mobile app is used for Hoover’s vacuum cleaners, including the upright vacuum and the different robot vacuums that the company has manufactured.

This might be a good thing if you have other Hoover products, but not having a dedicated app for this specific robot vacuum model means that there will be some features that you do not get to use through your phone.

What’s more, the mobile app suffers from a lot of glitches.  The buggy app makes it frustrating to use and can hinder you from starting a cleaning run while you are away.

What’s more, the Rogue 970 seems to have problems staying connected to your Wi-Fi network, which means that there may be times when it would not run on schedule.

So, yes, another problem for the Rogue 970 is the Wi-Fi connectivity.  There are some problems getting the robot vacuum to connect to your Wi-Fi network and when it does, it may disconnect for no apparent reason.

On paper, the Rogue 970 has a lot of potential. Here’s a robot vacuum that gives you some of the best technologies available.  It can map your floors, you can easily tell it where to go and where not to go, you can start it from anywhere in the world, and it works with voice commands.

Additionally, it has the same cleaning systems as other powerful robot vacuums:  a side brush, a main brush and a very capable suction.  It has a great battery, too.

It cleans well and it cleans for a relatively longer time when compared with other robot vacuums.  As a robot vacuum, you can pretty much rely on the Rogue 970 to do an excellent job.

However, having a buggy mobile app can negate all these, with some reviewers on Amazon reporting that the glitches in the mobile app can render the robot vacuum virtually unusable.

Hoover makes really good vacuum cleaners, it is just sad that we really could not recommend it because it is being sabotaged by its own mobile app and plagued with connectivity issues.

Meanwhile, Roombas have very capable robot vacuums that deliver a very efficient cleaning, yetit also paid attention to its other features, like making connectivity as painless as can be.

In fact, Roomba users can easily connect their robot vacuums to their Wi-Fi network.  The company behind the Roomba, iRobot, also made sure that the mobile apps deliver a great user experience.

So while the Rogue 970 was able to come up with a robot vacuum that could have rivaled Roomba, it still falls short because of a mobile app that needs a lot of improvement and because of a spotty connectivity.

Find here the top robot vacuum cleaners on the market!