When asked as a child, what you wanted to be when you grew up, the common denominator bringing together the cries of astronauts, scientists, athletes and doctors, is successful.

When it comes to success, nothing illustrates it more than your own house, a family, a well-groomed garden and of course an in-ground private swimming pool. Owning a pool 15 years ago was a beautiful thing, but it came hand in hand with the arduous time consuming task of regular cleaning. Well no longer.

Along came iRobot, and their extensive range of automated cleaning robots to ease your woes and introduce you to the future of household maintenance.

Renowned for their aesthetically pleasing, intuitive design, iRobot have introduced the latest in their automated pool cleaning robots in the form of the Mirra 530. This top of the line product enters the fray above the previous Verro 300 and Verro 500 models designed to fullfil similar purposes.

Although not cheaply priced (For the latest prices and discounts, check here), the Mirra 530 is the pinnacle of pool cleaning technology, offering Olympic water quality in your back garden.

At a significantly higher price than iRobot’s Verro models, we have to raise the question as to whether the Mirra 530 is worth the extra money?

Throughout this Mirra 530 review we look to give you an insight into the new features offered by the Mirra 530, its standout technologies and how it compares to the competition.

The Mirra 530 takes it place at the top of the iRobot pool cleaner pile, with fresh new technologies to justify it’s higher price tag. The closest product in price to the Mirra 530 is the Verro 500.

With a little difference in prices between the two models, we can safely say that the Mirra 530 is worth the extra expenditure. Here’s why.

The major difference between the two models, is iRobot’s patented ‘iAdapt Nautiq Responsive Cleaning Technology’, which we’ll refer to as iAdapt from now on. iAdapt is incredibly sophisticated technology for a pool cleaner to have at its disposal.

The technology uses complex algorithms to accurately assess the dimensions of your pool. The Mirra 530 uses this information gathered to intelligently select the optimum cleaning cycle for your pool, including the regions that will require more than one lap to clean.

This technology also allows the Mirra 530 to identify areas that other pool cleaners of its kind would struggle to clean, such as stairs.

iAdapt ensures a professional level of cleanliness with each clean, at a level unparalleled in other cleaners.

Where iAdapt is without a doubt the standout new addition to the Mirra 530’s feature set, there are also other intuitive new features that justify its hefty price tag. It’s new PVC scrubbing brush is directly geared to the motor of the robot increasing suction and filtration power.

In addition, new PVA wheels offer superior grip from the base of the pool to the water line, which is an area that previous models thread locomotive system was lacking.

With the new cleaning system capable of pumping and filtering 70 gallons of water per minute, as well as actively agitating algal and bacterial particles as small as two microns, the Mirra 530 well and truly raises the standard of automated cleaning.

Finally, iRobot have addressed the debris storage issue with the new Mirra model. Where the Verro uses hard to remove and clean filter bags, the Mirra adopts a simple plastic container, than can be easily removed and rinsed free of debris post cleaning.

Top Features of the Mirra 530

As a solid improvement on previous models, the Mirra 530 is a substantial step in the right direction. With quicker cleaning, pumping and filtration, it’s faster than its predecessors, and new cleaning actions enable previously missable microbes and algal particles to be eradicated from your swimming water.

There are however, just as many excellent features maintained from previous iterations, as there are fresh innovations.

King of the Pool? 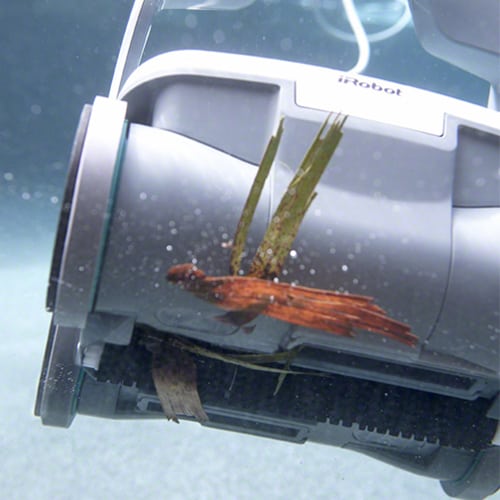 Where the Mirra 530 is easily the crowning jewel of iRobot’s pool cleaning line. Before making a purchase its important to know how it stands up to it’s competition.

If you’re looking at spending a big money on a product (For the latest prices and discounts, check here), you want to make sure that you are investing in the cleaner that best suits your needs.

In the table detailed below, we have taken the trouble to compare the Mirra 530 to other cleaners of comparable price in its class. As you can see by the table, where the Mirra 530 may be outperformed in some areas, we would say that it is top of the pile for numerous reasons.

So why does the Mirra remain top when it can be beaten in some of the compared features?

Well, simply put, its iAdapt navigation system is in a class of its own, with only the Zodiac Polaris offering similar technologies, with all other models needing some form of guidance, although the majority of it being electronic.

The ease of use that comes with the iAdapt system justifies the extra money over the other models straight off the bat.

The Mirra 530 performs admirably in the other compared characteristics, with it’s 20 micron filter and 70 gallon per minute suction rate. It also has the added bonus of easy to clean containers rather than frustrating filter bags, which is only else wise found in the Polaris.

However, with the Polaris failing to compare in terms of cord length and filter size. With all cleaners but the Polaris also running on treads, rather than wheels for superior traction and motobility, the Mirra 530 is confirmed as the best all round robotic cleaner, and well worth the extra few hundred dollars.

It is also worth noting (For the latest prices and discounts, check here) that it’s more than possible to pick it up cheaper with promotions and sales. 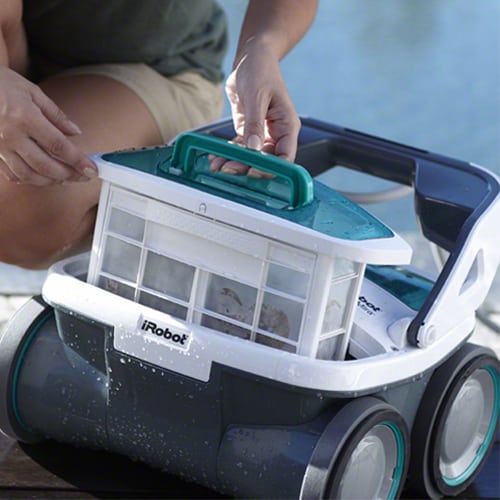 There’s no denying that iRobot’s Mirra 530 is a wonderful bit of equipment. It strikes the perfect balance between technological advanced features and usability. It’s the perfect pool cleaner for the everyday man, and with option additional accessories to optimise cleaning it’s incredibly versatile.

Where the Zodiac Polaris comes close to beating it to top spot, its superior suction and ability to clean larger pools of any surface type, the Mirra 530 is a cut above the rest.

The peace of mind that comes with the Mirra 530 is the icing on the cake. The fact you can place it in the pool and know that it has the capability to give a thorough clean, without the risk of tangling itself in its power cable thus requiring minimal supervision is an added bonus.

If you can justify the expenditure, the Mirra 530 absolutely will not disappoint you. If you still aren’t fully committed to the Mirra, check out our evaluation of the best pool robots here.

UPDATE: With the recently lowered price here, it’s hard to argue against going with the 530 right now! 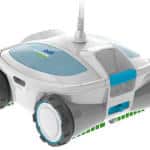 Aquabot Breeze XLS Review – Is This Pool Robot Worth the Money? 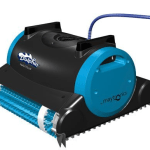 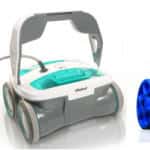 Looking for the Best Robotic Pool Cleaner? Check out These Top 3 Options 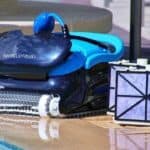 Dolphin Nautilus vs Nautilus Plus – Which is Best?