The robot vacuum market is expanding at a huge rate as the equipment becomes not only cheaper to purchase but increasingly efficient, allowing for both mopping, sweeping and vacuum-removal on a number of hard and soft flooring.

Far from being the quirky semi-usable devices they started out as, they have become an essential part of a hectic lifestyle, allowed to roam your living area, they can now be relied on to carry out a full cleaning cycle.

With their worth obvious, and the market assured amongst both the trendy working set and those who simply value their free time, the robot floor cleaner manufacturing base has mushroomed.

There are now devices to suit all tastes and budgets and with even the cheapest version completing a pretty good level of cleaning, the consumer is spoilt for choice.  That means that manufacturers have to stand out from the crowd, and that is where iRobot Roomba series comes into its own.

Generally considered to be amongst the highest quality and best performers, the Roomba’s have evolved over the years to become a sizzling series of effective and easy to use robot floor cleaners.

But just deciding on a Roomba out of all the other manufacturers just presents you with another issue; which Roomba is the best for you?

The Roomba 600 series are good quality, effective cleaning bots, but maybe you want the extra luxury of the 800 series with its increased functionality.

Deciding which the best for your needs is will depend upon a number of factors that you consider important, but to help you make that initial decision, we put the Roomba 650, up against the mighty Roomba 880, and lay the facts out for you.

Main Differences Between Roomba 880 vs Roomba 650

The Main Differences Between Roomba 880 vs Roomba 650 are:

Key Advantages of Both – Quick Facts

Continue reading for my full comparison in depth…

So even before we start to get down to the details, you can see that the 800 series has a lot more to offer in terms of functionality, but it all worth the extra bucks that you are likely to need to layout for it?

If you only have a small apartment, then spending out on a multi-room device might not seem a too good idea, particularly when the 880’s cheaper stablemates come pretty close on cleaning abilities.

There again, if you suffer from allergies, the more effective HEPA filtration on the more expensive model may benefit you more.

Cleaning ability.   This should be by far the most important aspect to anyone purchasing a cleaner, but then there is clean and then there is very clean, and that is the choice that you get with the Roomba range.

A combination of powerful motor, self-levelling vacuum head, and side brushes mean that any of the Roomba range will leave your floors spic and span.

Both models have the spinning side brush for up-to-the-wall cleaning.  This sturdy little device rotates rapidly and pushes corner dirt into the path of the main vacuum head, ensuring that it gets picked up.

While there is only one side brush, the Roomba’s clean effectively by approaching walls from different directions so that the brush can be utilised on all walls.

The Roomba’s have a good combination of counter-rotating soft-rubber collectors that drive dirt and debris into the vacuum area, and a powerful motor that sucks it all into the generous storage bin.

Both units have a variety of sensors to find dirt, and use multi-pass technology to ensure a thorough clean, but the 880 scores once more by incorporating a higher degree of sensors and is able to identify even small patches of dirt and fluff that need removing.

Whether you are using these bots on hard flooring or carpet, you can be pretty well assured of getting a god cleaning job done. It has to be said that though that really high pile carpet and rugs can defeat them and if you have such flooring, but generally anything of the 1/2 inch variety or less is fine.

Navigation. The 650 is really only restricted to one room at a time and uses virtual walls – which do pretty much what they imply – to allow it to navigate that area, whereas the 880 is pretty much free to roam the whole area thanks to the use of lighthouses that allow the little robot to navigate out of a room and around a larger area.

These devices provide a signal for the 880 to follow and when stationed strategically, they let the vacuum move around a much larger and complex area than a simple room.

The optical and acoustic sensors fitted to each model are pretty good and allow them to move around fairly freely, but while large pieces of furniture are one thing, smaller items such as ornaments and floor-standing vases might succumb to a bit of a bashing as the cleaner charges around in what appears to be a haphazard fashion but is actually a program designed for full coverage.

Both machines have edge sensors to stop them falling down stairs.  That doesn’t mean that they are completely bump free, and they merrily crash into skirting boards and furniture as they work their way around your room.

That, however, is an issue with all robot vacuum cleaners rather than something particular to the Roomba range, and it will become less of an issue as robot navigation systems become increasingly advanced.

Features. While the two devices might seem similar in the equipment they have at first glance, it soon becomes apparent that the 880 has an ease of use that sets it apart from its smaller brother.

Both devices can be programmed to operate at set times over a seven day period, so you can return from that business trip with your living area smelling fresh, but the 880 does it with a little more finesse and via a touchscreen pad rather than a set of slightly clunky buttons like the 650.

But if you don’t feel like bending down, the 880 has a remote unit that does the same thing.

The big feature on the 880 has got to be the HEPA filtration system which is designed to filter out allergens and other debris likely to affect those with a more sensitive nose.  And it does a great job of doing that too, picking up pet hair with ease and packing it away in the removable bin.

The bin and the battery are the two features that are likely to be of interest to the consumer as if neither are large enough then your robot vacuum buddy is likely to run into trouble.

The battery is less of a problem as it is both high capacity and rechargeable.  The ‘home’ base on both units acts as a recharging station and makes sure that they are always at capacity when needed.  In addition, the Roomba’s will return to base mid-clean if they detect that the battery is running low.

The bin is a little more of an issue and while it is relatively large, it isn’t huge – since neither robot is huge anyway – and it need emptying regularly.  This can become more of a problem with the 880 and its ability to pick up even the smallest crumbs as the bin fills so much quicker.

Those with moulting pets may find that they spend a lot of their time checking and emptying the bin simply because the 880 is so effective.

Verdict: Which Should You Go With?

The iRobot Roomba’s are superb units that can give you confidence to set them going before you leave and return to a clean and tidy living area.

While the 650 version has a lower specification and less features, its lower price will no doubt make it more appealing to those on a budget or with a smaller area to clean. Pricing can fluctuate, but be sure to check this listing first.

But the extra cleaning power of the 880 makes it a must for those with serious allergies or badly moulting pets. For pet owners, I’d definitely go with the Roomba 880. I’ve found the best pricing at this listing here online.

In buying a iRobot device, you are pretty much assured of getting one of the best performing products on the market, and whether you want or need to spend the extra money is up to you, but you do get a lot more robot vacuum cleaner for your cash.

The 600 series comes with very wide Wi-Fi connectivity and Alexa compatibility. This technology, let you control the robot through an app for a very affordable price.

How long does Roomba 650 battery last?

The battery of the Roomba 650 can run for up to 2 hours. When the battery is running low, the unit will return to the station and recharge for itself.

Can the Roomba pick up cat litter?

The 600 and 800 series does not specialise in pet hair and cat litter. If you are a pet owner and need a robot to keep your house tidy, we recommend the “e” and “i” series. 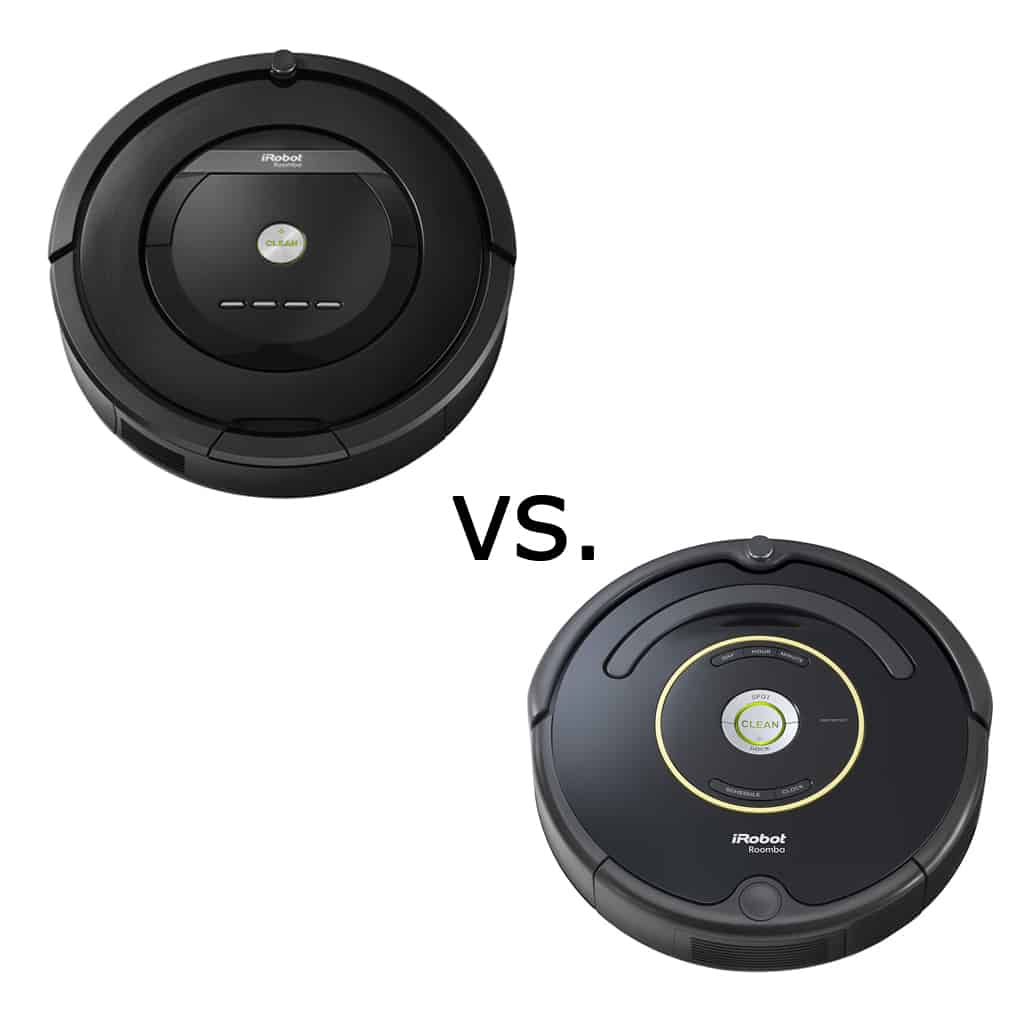 If you have the budget, the Roomba 880 is a significantly better vacuum in terms of performance. Check this listing for the latest deals.

However, the Roomba 650 (now also referred to as the 652) is still very competent and an EXCELLENT value for the money. It’s the oldest Roomba that still has auto-scheduling features, so you aren’t missing out on any huge new feature advancements. You can check out the latest pricing on the Roomba 650/652 here.

You might also enjoy one of Roomba’s most recent models. Check out our top Roomba model guide here!