The encroachment of smart technology into kitchen and cooking appliances continues at pace. We’ve got smart ovens, refrigerators, washing machines and much more to come.

Now, here’s a new electrical smoker sneaking in a Bluetooth radio to let you keep in touch with temperature and cooking progress via your Android or Apple smartphone.

That’s despite the outdoorsy, getting back to nature feel of a good smoke, but I guess pretty much everyone has a smartphone these days and might want to take advantage of the technology. 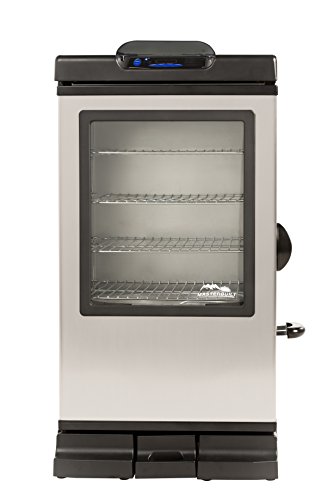 Sure you can’t go too far away, as its Bluetooth only, but it could still help keep your mind on the food when you’re having a good time with friends.

That’s about it on the technology side, otherwise, you get a pretty smart looking smoker with four racks that are designed for outdoor use.

Given the length of time for most smokes, from chicken to steaks, cheese, briskets or turkey for Thanksgiving, it is understandable that you wouldn’t want to be stood next to it for hours on end.

Even without the Bluetooth, the Masterbuilt is a stylish piece of kit for any yard. With wheels to move it around, and legs for stability and to make it more accessible, it looks good and smells great when meats are smoldering away inside. Set up is fast and after a burn-in period of a few hours you can get cooking.

Whether you have your own family recipes or go for one of the many cookbooks, there are endless combos of meat and flavor to try, be it mesquite, hickory, cherry or a brave combination for your low and slow smoking approach. Once you’ve decided what to cook, the Bluetooth feature can come into play.

The small app (35MB for the iOS version) lets the chef keep an eye on the temperature, which is key to a good smoke and an eye on how long is left. Control features include power on or off, set cooking time and temperature, use a timer, and check the light and meat probe settings.

The app looks pretty stylish with good analog displays and it is easy to pair the smoker to a phone – at least this is one device that anyone is unlikely to want to hack!

Unfortunately, the Bluetooth connection appears to be very range limited with a functional area of just a dozen feet or so, which hardly makes it worth the effort or extra expense.

Also, the app is pretty crappy, based on the reviews for it. Nowhere in the product guide does it say what type of Bluetooth signal is used, but hopefully an upgrade to a better standard is on the way.

Yes, it works, but there’s no way to set custom notifications, like reminders to reload wood chips or pellets, or anything like an advanced feature. All of which is a bit disappointing considering this is the only feature that helps differentiate the product from a basic smoker.

The app was last updated back in February, so we’re not sure if any further fixes or improvements are coming, despite user complaints.

Let’s assume you are lucky and by some quirk of wave propagation, you get a good Bluetooth signal out of the Masterbuilt.

In that case, you can sit off the deck with your buds and have a good time while the smoker does its thing. We guess that’s the only real advantage of having a smart model, and if it does work then great.

Otherwise, you are probably better off going with a dumb model until something better reaches the market. There’s no problem with this unit’s ability to smoke food with the best of them, but selling it as “smart” when it can barely muster a radio signal a couple of meters is pretty sad.

Naturally, old hands will probably be offended at the thought of an electric smoker, yet alone one with some dumb gadget in it. So, this probably isn’t something you want to get as a replacement for some ancient piece of cast iron that a keen family member has been smoking in for generations.

On the other hand, if you want to start out smoking, then this is still a neat and good way to get started, no matter what the signal strength is.