Imagine a mower that works on your lawn the way a Roomba works on your floor. Imagine a mower that you can just program to do everything by itself and not require you to push or drive it around under the intense heat of the sun – and therefore keep you from being able to do anything else. The good news is that such a lawnmower exists: check the McCulloch ROB 1000 Review.

But is it really a good buy? 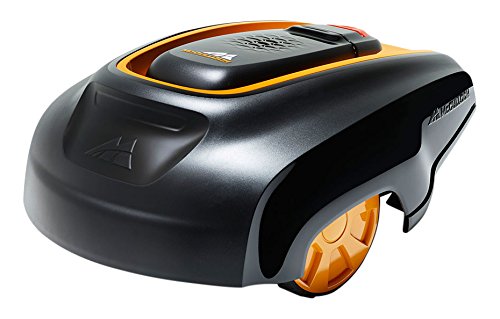 The McCulloch ROB 1000 Programmable Robotic Mower has an interesting design that makes it look like those modern vacuum cleaners without the handle. It uses a black and yellow color scheme. The top cover hides the 15-button keypad that you use to create schedules. The keypad also has an LCD display where you can see the settings.

The ROB 1000 comes with an easy-carry handle attached to the robot body. The entire robot lawnmower measures 23.23 inches long by 17.32 inches wide by 10.24 inches high and weighs seven kilograms.

What Does It Do?

The McCulloch ROB 1000 Programmable Robotic Mower is a robot lawnmower that is able to take care of up to 1,000 square meters of lawn space. It will mow your lawn on schedule even if you forget.

The ROB 1000 is a hard worker. It would keep mowing your lawn until the battery would run out and it would need to automatically go back to its charging dock to recharge. The lithium-ion battery needs to be charged for 50 minutes. The ROB 1000 can manage slopes of up to 25% or inclines of around 14 degrees.

This robot lawnmower works very quietly, giving noise as low as 57 decibels. The company, however, guarantees a noise level at 59 dB, which is as loud as background music, the noise level at an office, or an air conditioning unit that is located 100 feet away. In other words, the ROB 1000 won’t bother you or the neighbors at all. 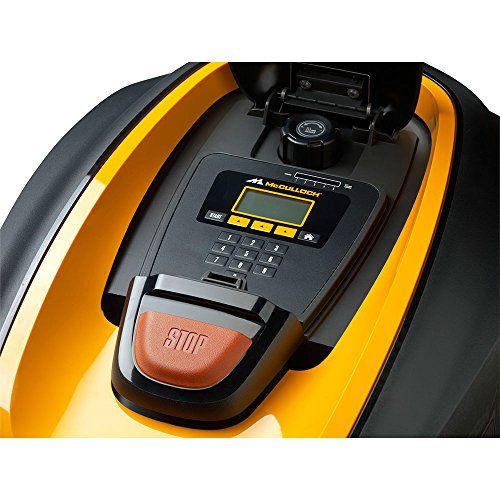 The ROB 1000 also comes with security and safety features. For instance, the ROB 1000 has a loud alarm that will sound if it is lifted, which is great at scaring away potential thieves. You can also protect it with a PIN code so nobody else can start mowing without you. It has a lift sensor and tilt sensor, which stop the blades from whirring the moment it turns turtle. Other safety and security features include the time lock and installation lock.

Furthermore, the ROB 1000 is waterproof, so it does not matter if it rains while it is mowing the lawn!

If you have an average-sized lawn that is relatively flat, then you would love how the McCulloch ROB 1000 is able to handle all of that area with ease. You can relax, and even go out of the house, and ROB 1000 will do all the hard work for you. It is really a good way to forget about the dreaded chore of mowing without letting your lawn look bad.

The ROB 1000 does not only do all the mowing for you, it also works without complaints. If you want, you can have it continuously working 24 hours a day, stopping only to recharge. And because it works quietly, you can even have it mow the lawn at night, while you and your neighbors sleep!

Because the McCulloch ROB 1000 Programmable Robotic Mower works outdoors, owners should be concerned about security. You can lock the ROB 1000 with a PIN code, and it will not work until you key in the code. Aside from being practically useless without the code, the ROB 1000 will also sound a very loud alarm if somebody tries to lift it.

The biggest benefit that you get from the McCulloch ROB 1000 robotic mower is the fact that it saves you a lot of time. You no longer have to manually mow the lawn yourself because you can just leave it be. You do not even have to be home; just set it to work or let it follow the set schedule.

On top of that, the ROB 1000 also comes with a tilt sensor, which detects if the lawnmower tilts too much and gets flipped over. This is a great feature if you have pets or kids around the house because the tilt sensor will immediately stop the blades from rotating to make sure nobody gets hurt.

The McCulloch ROB 1000 is not a smart robotic mower. It does not connect to your Wi-Fi network or connect to the Internet so that you can control it remotely. You cannot use a mobile app to start, pause or stop it from mowing. You can, however, schedule it to run at a certain time. You just have to bend over the mower to create the schedules.

For its price, the McCulloch ROB 1000 Programmable Robotic Mower does not have a smart navigation system that allows it to know if it is still on grass or not. It will continue to move and move and even start to mow your neighbor’s yard, or worse, wander off to an adjacent street. To get around this problem, the ROB 1000 employs something far more low tech: boundary wires. 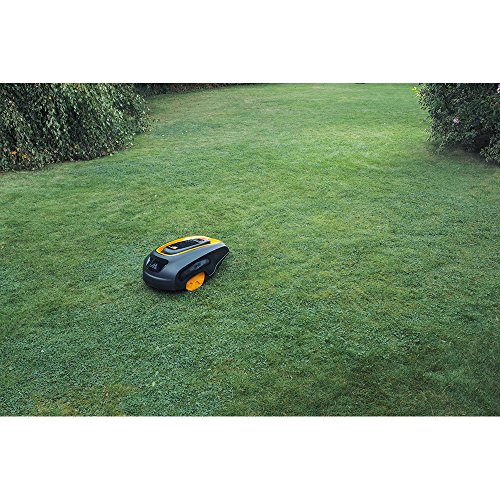 Every purchase of the McCulloch ROB 1000 comes with 200 meters of boundary wire. If you have a large lawn, you can get 150 meters more. So if you have a lawn with a perimeter of 1,000 meters, you will be spending additional or the boundary wire alone, or more than half the list price of the mower itself.

On top of making sure that you have a boundary wire securing the perimeter of your lawn, you would also want to put up the boundary wire around areas that you do not want the Rob 1000 to go into. For instance, you may want to cordon off flower beds, ponds, or the swimming pool.

But here’s the thing: all robot lawnmowers that are available now need boundary wires to define the perimeter of your lawn. So this is not exactly a point against the ROB 1000. Probably in the future, we would be able to see a robot lawnmower that does not need these perimeter wires. And while we are at it, we might as well wish for a robot lawnmower that uses solar energy to power itself, like the Husqvarna Automower Solar Hybrid. This model, however, is quite pricey.

Two other downsides of the ROB 1000 are:

Make no mistake about it, even with these downsides, the McCulloch ROB 1000 is still quite a robot lawnmower that can work autonomously, freeing you from spending too much time and attention on the upkeep of your garden.

However, if you are looking for a robotic lawnmower that you can control from anywhere in the world, you might want to check out the Husqvarna Automower 315, which can cover roughly the same area as the ROB 1000, but can connect to the Internet and allow you to use a companion mobile app to control it. The Automower 315 would also be able to work with Amazon Alexa and Google Home soon, allowing you to use voice commands to start mowing the lawn.

You can also get the Husqvarna Automower 450X. It might be more expensive than the ROB 1000, but you can set the schedules while you are enjoying your morning tea inside your home.

You can also start, stop, or pause your robot mower. It can also cover larger areas of more than 5,000 sq. m. Finding this too expensive?

The ROB 600 retails for a fair price. For even smaller lawns, you can consider either the Robomow Rx20u or the Rx12u. Both of these Robomow models come with a mobile app.

Then there are people who might hate having to put up boundary wires. The LawnBott LB1200 Spyder Robotic Mower is perfect for them. There are also those people whose lawns feature very high slopes.

The McCulloch ROB 1000 Programmable Robotic Mower is a quiet and very efficient robotic lawn mower. You only have to set everything up by putting up the boundary wires and then creating a schedule, and you can completely forget about it. You can even forget about mowing the lawn because the ROB 1000 will always remember to cut that grass!

All of its other features are just bonuses. It works quietly, it helps you keep your kids, pets, and other people safe, and it can scare off would-be thieves. If you do not have a need to remotely operate your lawnmower, then this should be a good product to consider.