Telepresence robots are designed to take your place when you cannot go to the office.  They try to make people think that you are there even when you are at home or are oceans and miles away.

They can move around and allow you to easily check on things, attend different meetings in different rooms, and see to the office without being physically there yourself.

However, these robots are too bulky.  In fact, in some use cases, the bigger footprint of telepresence robots is a requirement, such as when it acts as a roving security watchman at night.

There are times, though, when you need a telepresence robot that is discreet and small.  This is where Padbot T1 becomes useful.

Features of the Padbot T1 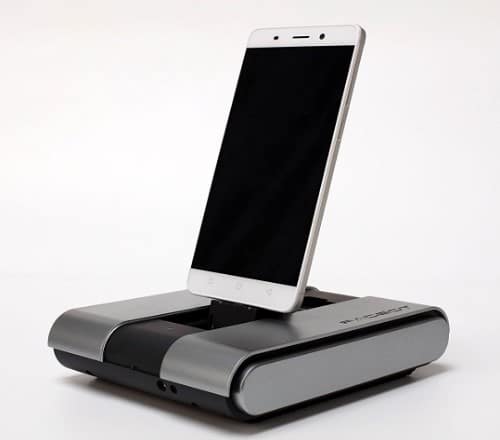 Supports both iOS and Android phones.  Whether you own an iPhone, a Samsung Galaxy S6 Edge, or just about any smartphone, you can use it with your Padbot T1.

Portable.  The Padbot T1 measures 5.16 inches wide by 6.38 inches long and stands 1.42 inches high without attachments.  It is smaller than an iPad mini 4, but much thicker.

That means you can put it into your shoulder bag, backpack, or attaché case.  Even if you have to carry it around all day, you would not mind as it weighs only a pound or 460 grams.

Doubles as a charger.  Connecting your smartphone to the Padbot T1 can charge your device reliably and fast.  More than that, the Padbot T1 can also function as a dock, allowing you have to hands-free video chats.

Ideal for home and office use.  The Padbot T1 is great for home use.  If you want to keep an eye on your home, you can have the Padbot T1 going around the house when you are away.

You can also check in on your kids and their sitter or on your pets without attracting too much attention.  You can likewise use the Padbot T1 to join office meetings, or even attend classes when you are indisposed.

Wi-Fi-connected for remote control.  Once you have the mobile app installed, you can use it to control the Padbot T1.  The robot would connect to Wi-Fi, allowing you to remotely control it.

Mobile app.  The mobile app also connects to the attached smartphone via Bluetooth, allowing you to control the phone as well.  Using the mobile app, you can adjust the speed from level 1 to 4 at which the robot moves.

This means that if you are running late to a meeting, you can gain more ground by switching to Level 4 speeds.  However, if you are involved in a leisurely chat with your baby or your pet, you can switch to Level 1.

The mobile app also allows you to change the video resolution from 240 pixels to 720 pixels.  A lower resolution gives you smaller files but if you need to see things clearly, you can get high-definition views of things. 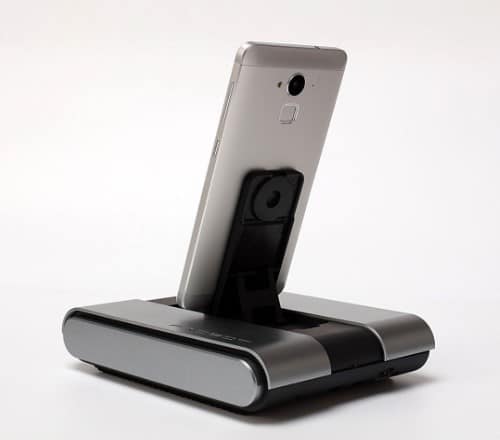 Sensors.  The Padbot T1 has various sensors that help keep it safe from collisions and falls.  The anti-fall sensors are found both at the front and at the back of the robot, enabling it to stop moving when they detect that it is on the edge of a stair, a platform, or a table.

Meanwhile the front portion of the Padbot T1 has anti-collision sensors that keep it from bumping into walls or furniture.

Smooth movements.  The Padbot T1 makes use of crawlers to move around smoothly as well as avoid getting stuck on minor bumps on the floor.  These crawlers also help the device stay stable as it moves around.

Available in two colors.  The Padbot T1 has two color options for you to choose from.  There is the space gray for a classic look, and there is the more feminine pink rose.

Made with durable and top quality materials.  The Padbot T1 has exchangeable phone connectors that allow you to use it for both iOS and Android phones and enable you to switch it up.  You can use the Padbot T1 to charge any smartphone while also using it as a camera.

It has a magnetic sticker that helps keep the smartphone in place while it is moving around.  The body is also protected by the aluminum alloy shell, which also gives it an expensive and sleek look while also guaranteeing durability.

Long-lasting lithium ion battery.  The Padbot T1 uses a 13.32-watt-per-hour lithium ion battery that can fully charge your smartphones even as the robot moves about.  The battery can also provide enough power for 100 hours of standby, 12 hours of normal use, and 2 hours of extreme usage.

That means that even if you have the video turned on and the robot running at full speed, while the sensors are also active, you can still go around on the Padbot T1 for a full two hours before it needs to get charged. 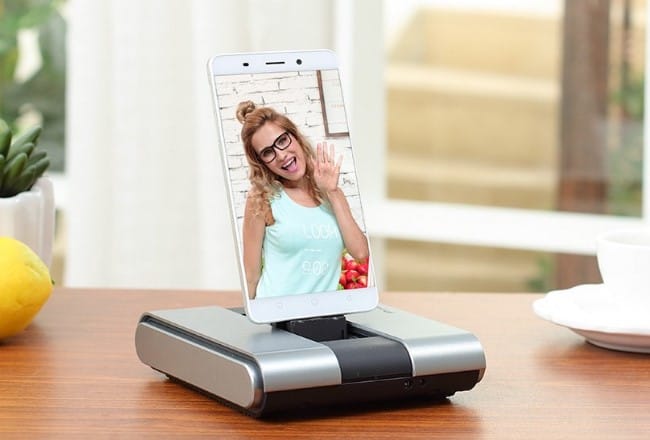 As a telepresence robot, the Padbot T1 does a great job “representing” you when you cannot be there physically.  It also helps you get to meetings faster even when you have to transfer rooms.  The mobile app is well-made and can help you see things at the office as well as move around easily.

One of the main functions of the Padbot T1 is video teleconferencing.  In this regard, the company has its own Global Servers System that enables you to have fast and smooth video chats with your friends and colleagues.

In addition, because you really cannot see if there is anything on the floor or if you are going to fall off the edge of a stair, the sensors built into the Padbot T1 can serve as your eyes.  It stops the robot from advancing if it is going to fall, and it keeps it from bumping into walls, too.

As a phone charger, it can charge your phones quickly, sometimes even faster than their very own chargers.  To charge a phone, you can use the included phone connector or use the USB interface.  As for charging your robot, there are two ways to do it: you can use a charging base or you can use an adapter. 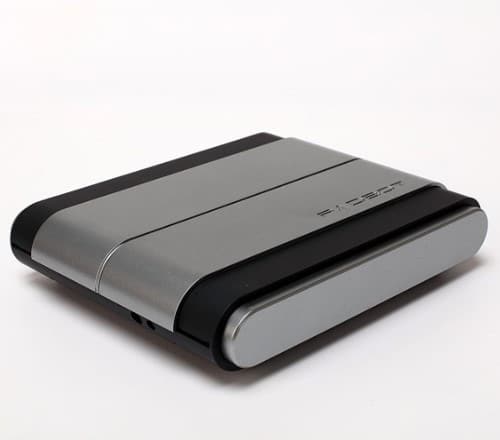 The Padbot T1 is really small, which might be a problem if you are navigating it through school hallways, busy offices, or just about anywhere with considerable foot traffic.  Some people might not notice the Padbot T1 and may accidentally step on it.

While the Padbot T1 has anti-fall and anti-collision sensors, it does not have a way of avoiding wet floors.  The company advises that you keep the robot away from wet, smoggy, humid, or dusty environments.  Having the robot go over wet floors or a pool of water on the floor might damage it.

While the Padbot mobile app includes a QR code reader for this purpose, it means that you would need to be physically in the same room as the Padbot T1 so that you could pair the two together.  This may prove to be inconvenient as you cannot use just any smartphone to check your Padbot T1.

This, however, makes it more secure because you cannot just hack into the Wi-Fi connection to see what the Padbot T1 is seeing.  In short, hackers cannot use the Padbot T1 to spy on you unless they get to scan that QR code.

Furthermore, it takes five hours to fully charge your Padbot T1.  Because you need to couple the charger with the Padbot T1, you really cannot leave it plugged in if you want to use it when you are away because it will limit the mobility of the Padbot T1.

That means that if you plan to use your Padbot T1 to secure your home when you are in the office, you would have to charge it beforehand.

Support might also be a problem.  The company might have an online Web site and a support e-mail, but it lists a Chinese number on its support page.  If you run into problems with the Padbot T1, you might find it difficult to talk to a live person who could assist you immediately.

Final recommendations for the Padbot T1 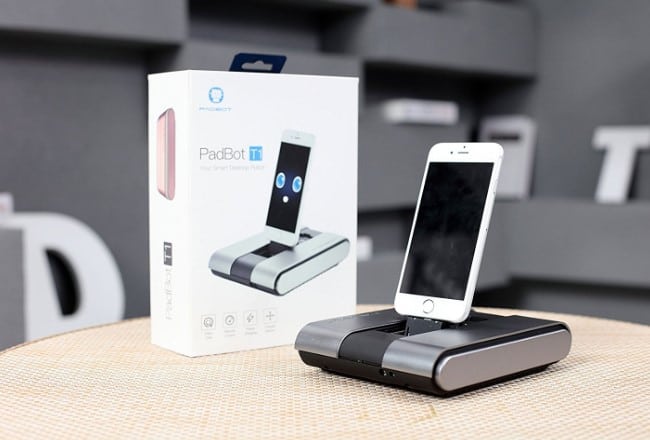 The Padbot T1 gives you a portable telepresence robot that you can easily control from your smartphone.  It works very well and can rival full-sized telepresence robots.  It is also very evident that a lot of thought has been poured into the design, features, and functionality of this robot.

Check here for its price and discount. It functions as a fast charger, a dock, and a telepresence robot.  Not a bad deal if you do not mind the probable lack of support for the product in the future. 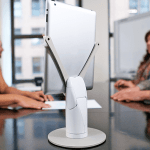 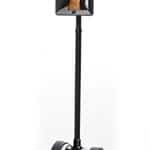 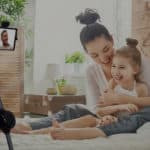