In 2002, the iRobot Corporation released its first Roomba robot vacuum cleaner. Almost twenty years later, the company now makes several families of vacuums, each with different features and capabilities.  One such family is the e Series.

The e-Series is a mid-tier vacuum marketed towards pet owners who need a vacuum with strong suction to pick up pet hair and pet allergens. It currently has two vacuums in the series: the e5 and the e6. While these two robotic vacuums do have a lot in common, there are a few subtle differences that can help you decide which one makes the most sense for you.

My Bottom Line Up Front: The only real difference between these two models is the accessories package. As such, I would highly recommend sticking to the more affordable Roomba e5 available here. You can also add on accessories later, if you REALLY need them (you may not). 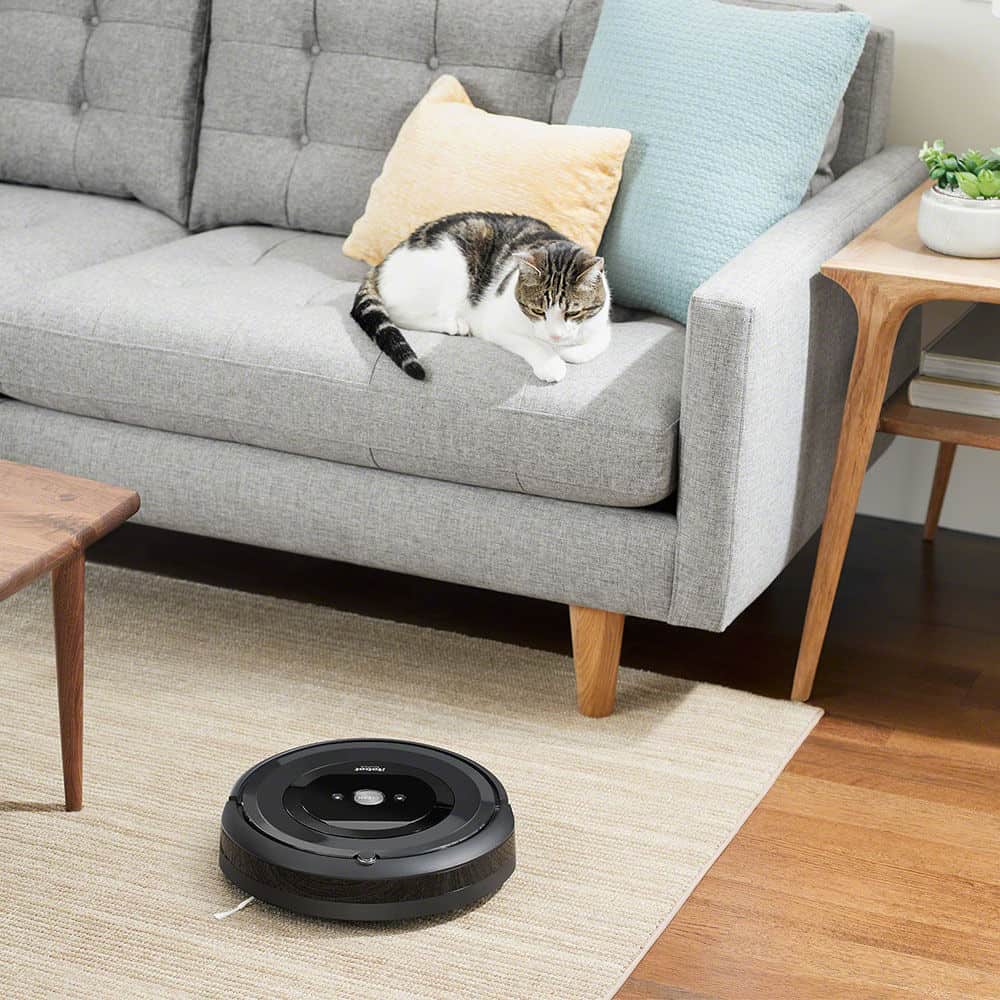 The Main Differences Between Roomba e5 vs Roomba e6 are:

Both of these robot vacuums are relatively new to the market. Roomba released its e5 in September 2018, while the e6 was introduced just a few months later.

According to the iRobot website, the e5 is easily available on the market,  however, the e6 can only be found at select retailers. A quick Internet search reveals that the e5 can be purchased from iRobot’s website and Sam’s Club. The e6 originally started as a Costco special item, but now is widely available online and can be bought from independent vendors on websites such as Amazon and Walmart.

The e5 comes includes the robot vacuum cleaner itself, a charging station, electrical cord for charging, and owner’s documentation. The e6 comes with everything the e5 offers, plus two extra “virtual wall” devices and an extra filter. If you buy the e5 from Sam’s Club, the vacuum comes with three extra filters inside the box.

The virtual wall devices are small, box-like devices that contain electronics that shoot an infrared beam for up to 10 feet. The e6 comes with virtual wall components that offer two modes. When switched to the virtual wall mode, the infrared beam projects in a straight line to create a wall barrier that the vacuum will not cross. It, therefore, creates a “virtual wall” and keeps the vacuum in a specific room to clean only that room. 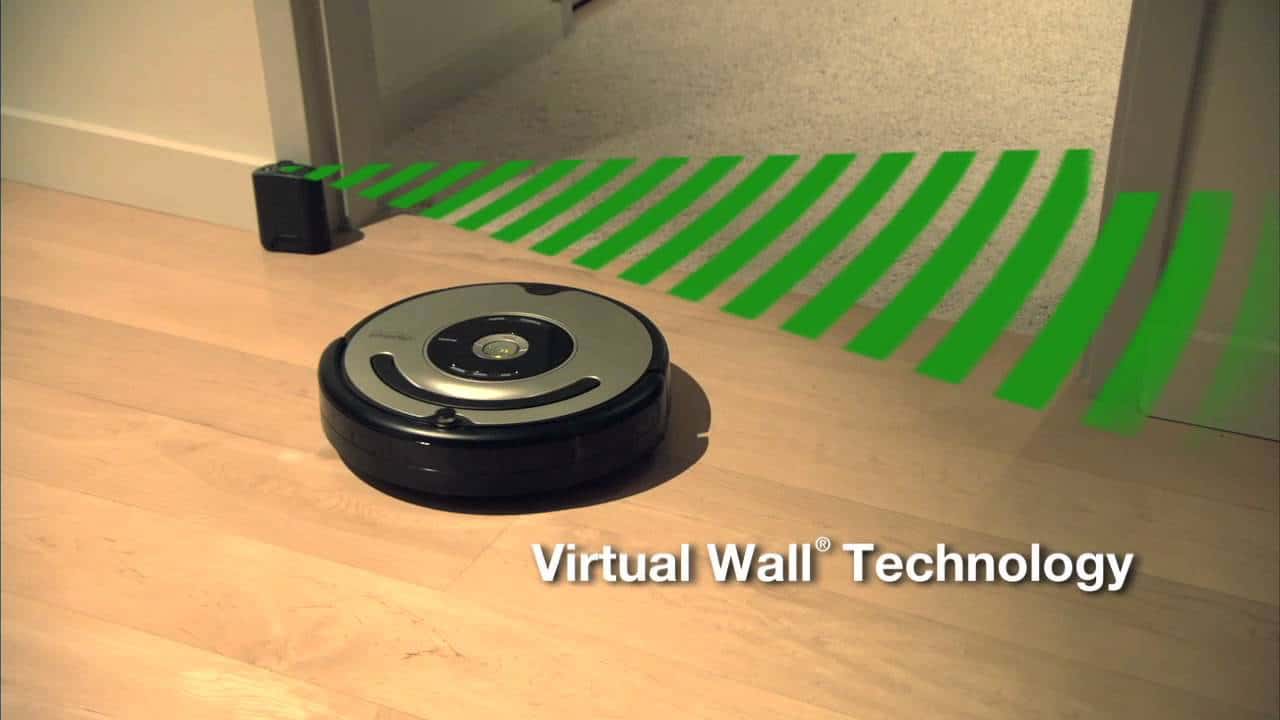 The dual mode virtual wall devices also have a “halo mode.” Under this setting, the device creates an infrared beam circle of up to 4 feet across. The infrared signal prevents the vacuum from entering the circle so that the vacuum cannot knock over light objects such as a pet’s food dish or water bowl.

A pair of virtual wall devices sell for $100 on the iRobot website, and they are compatible with most Roomba vacuums. These are a great purchase if you find that you need to section off certain rooms or areas within your home.

The high-efficiency filter is used to filter out air allergens. These filters are replaceable and interchangeable between the e5 and the e6. They cost $30 on the iRobot website and are especially handy if you live with a lot of pets or someone who is highly susceptible to allergies.

As you can see, when the price of the accessories are added to the price of the robot vacuum itself, the e5 and e6 cost virtually the same. However, if you have previously owned a Roomba vacuum so you already have virtual wall devices and if you are a Sam’s Club member, then the e5 from Sam’s Club is the better buy. Otherwise,the e6, especially if it’s on sale, might be the best choice if your only consideration is price.

General Features of both e5 and e6

When it comes to the features and functionalities of the e5 and e6, the vacuums themselves are virtually the same. In addition to the standard black, the e6 also comes in pale gold. Sam’s Club’s e5 comes in silver. Having the option of buying different colored vacuums appears to be one of the few difference between these two models.

Here are some of the more significant features available on both the e5 and the e6:

iRobot has continued to improve on the suction power of its robot vacuums. For this new e Series, when compared with the older 600 Series, suction power is five times more powerful. As a result, the vacuum can easily pick up dust, dirt and debris whether it’s large or small.

The e Series targets pet owners, so it is designed to pick up not only pet hair but also filter out up to 99% of pet allergens. iRobot performed a fiber/pet hair pickup test against its competitors Shark, Neato, Ecovacs, iLife, and bObsweep, and discovered that the e Series picked up more debris. The vacuum uses a high-efficiency filter to strain out the pet allergens.

Instead of the bristle brushes found in most traditional vacuums, both the e5 and the e6 use a pair of rubber brushes to pick up dirt and debris. Each brush has a different tread pattern, and they rotate towards each other so that while one brush loosens and sweeps the debris towards the suction opening while the other brush lifts the debris up into the opening.

The rubber treads are soft, so they hug the floor. Whether the floor is carpet or hardwood, the rubber brushes can make firm contact with the surface to be cleaned. They can even pick up debris from the challenging carpet-to-hardwood (or vice versa) transition area without issue. 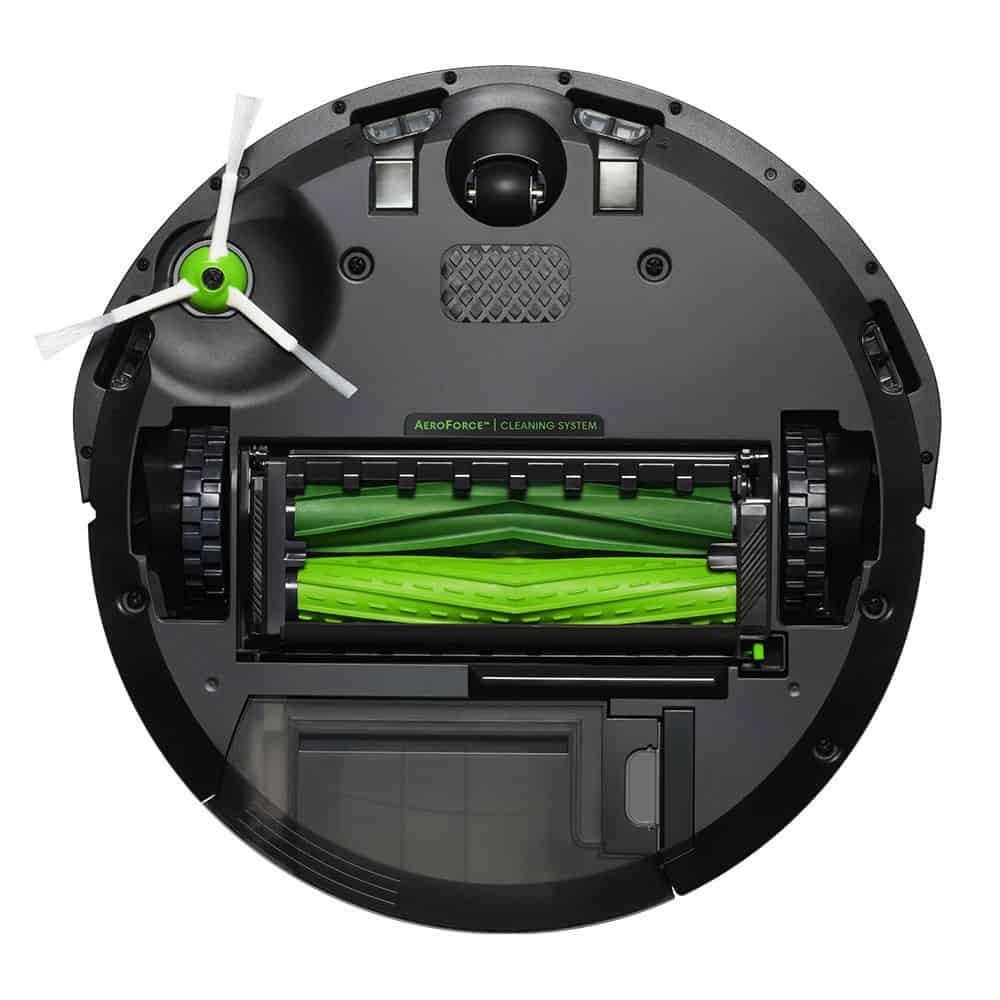 While the older model Roomba vacuums could be programmed to clean at certain times of the day and week, the user had to enter the programming through a series of buttons on the vacuum itself. The newer model vacuums such as the e-Series can be programmed more intuitively, through iRobot’s proprietary app called the HOME app. The app is available for both iOS and Android devices as a free download.

After downloading the app, registering with iRobot, and pairing the phone or tablet to the vacuum, you can easily and intuitively navigate through various menus to program the vacuum. You can toggle various buttons to start and stop the vacuum on different dates and times of the week. You can also activate the vacuum to clean at any time.

Both e-Series models can also be controlled by voice commands through Amazon’s Alexa or Google Home. So if you don’t want to pull out your phone every time you need to start or stop a cleaning cycle, you can do so by telling your preferred smart assistant.

The e5 and e6 both use a lithium-ion battery. When fully charged, the battery has up to a 90-minute run time.

All Roomba vacuums come with an edge sweeping brush. The brush is a three-pronged brush that protrudes slightly from the underside of the vacuum. The brush rotates to sweep debris and dirt away from edges and corners so the dirt and debris can be easily suctioned into the dust bin. When the edge sweeping brush is at work, the vacuum tilts slightly upward by 27 degrees to make it easier for the brush to bring the dirt and debris under the vacuum.

The e Series vacuums are equipped with iRobot’s Dirt Detect Technology. The technology includes a sensor that detects soiled surfaces so the vacuum’s programming can steer the vacuum to repeatedly drive over the dirty surface until the area is clean.

Both the e5 and the e6 are equipped with a new type of dust bin not found in older Roomba vacuums. The new bins can be removed and rinsed under running water without harming the electronics of the vacuum itself. Take it out, rinse it off, dry it, and replace it. Now your bin is clean and ready for the next cycle.

If your house has multiple floors or a basement, you can use the e5 and e6 without worrying that the vacuums will drive off the stairs and wind up in pieces on the floor. Each vacuum is equipped with a Cliff Detector so that it turns away from the edge of stairs. 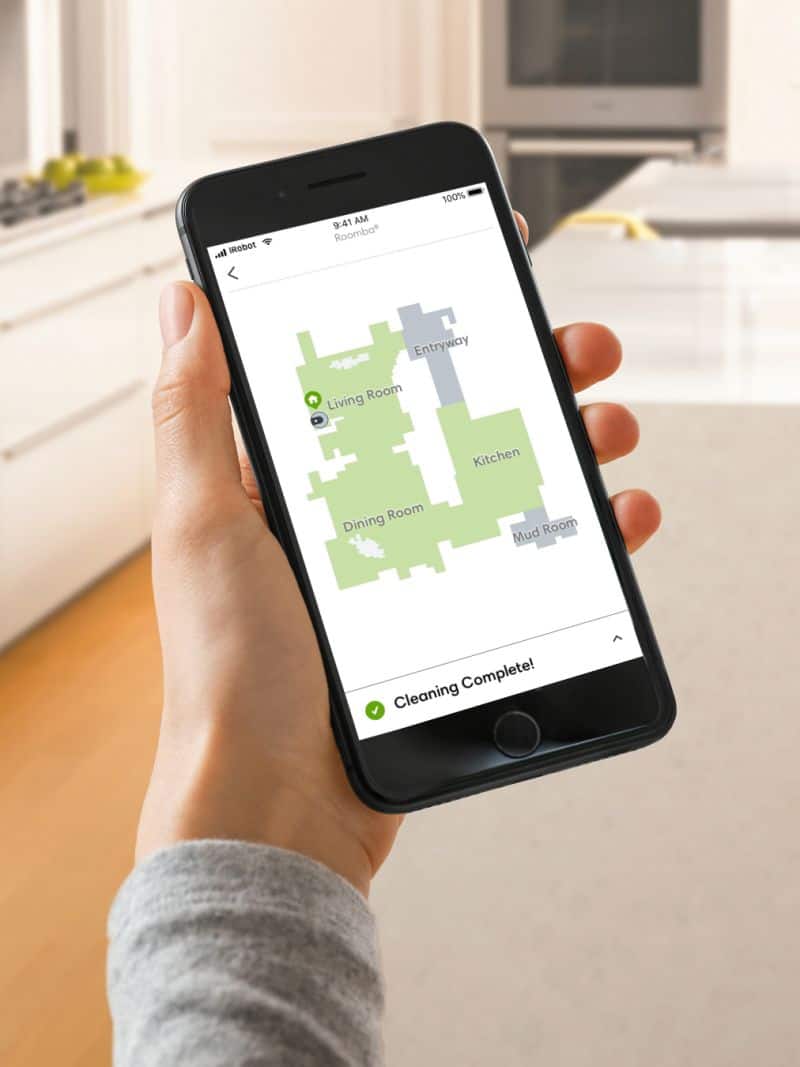 All Roomba vacuums are programmed with the Smart Navigation software. Even though the vacuum sometimes appears to be moving randomly throughout the room, the Smart Navigation programming keeps track while the vacuum’s multiple sensors help it move around objects such as table legs. When the vacuum is finished with a room or is low on battery, it navigates itself to the docking station to recharge.

Most of the Roomba´s robots come with a Cliff Detect sensors system, including the E5 and E6 models. This system prevents the robot from trembling or falling on the stairs.

Does Roomba e5 work on carpet?

The Roomba e5 is functional for almost every surface, including carpets. The suctions power of the robot is ideal for pet hair and allergens.

Does Roomba e5 have mapping?

Even though this is a very powerful item, these models don’t come with the iAdapt Technology of newest Roomba’s, so it won’t be able to map your house.

Conclusion: The Best Roomba Vacuum for You

When it comes to choosing between the Roomba e5 and Roomba e6 robot vacuums, you would be purchasing basically the same vacuum equipped with the same hardware and programmed with the same software. The only real difference between the two models is the accessories packaged with each device.

Whichever model you buy, be sure to do some last-minute price shopping for sales and manufacturer rebates. Finding the right sale, when combined with knowing which accessories best fit your needs, could save you a significant amount of money.

My Bottom Line: The only real difference between these two models is the accessories package. As such, I would highly recommend sticking to the more affordable Roomba e5 available here. You can also add on accessories later, if you REALLY need them (you may not). 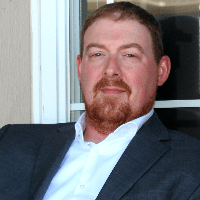 Justin obtained his MBA at Baker University. He loves learning and writing about smart home technology and has a passion for its application. Justin brings a wealth of writing experience to the All Home Robotics team and enjoys discovering new and creative ways to implement smart home technologies into his own home (and sharing his findings here)!