Many people consider iRobot’s Roomba as the leader in the robot vacuum space. However, Hoover has long made a name for itself when it comes to vacuum cleaners. So much so, that some people say “Hoover” when they mean vacuuming or cleaning your floors.

Hoover also has a line of robot vacuums that could be seen as the company’s response to Roombas: the Hoover Quest.  How do these robot vacuums fare against Roombas?

The Main Differences Between Roomba vs Hoover Quest are:

Prices for the Hoover Quest line range is quite pricey. The Roombas, on the other hand, are more expensive. 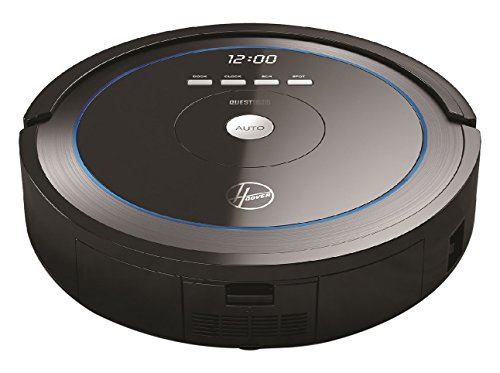 There are three Hoover Quest models available today: The budget Quest 700, the Quest 800, and the Quest 1000.

All of these robot vacuums have a round shape with low profiles that allow them to go under most furniture pieces.

But if you are in a pinch, you should know that the Hoover Quest 700 and Quest 800 have the lowest heights at 2.85 inches. These robot vacuums could easily run under low-clearance furniture, especially when compared to the Roombas, which have heights of 3.6 or 3.7 inches.

One thing that makes the Quest robot vacuums better than the Roomba is that the mobile app allows you to drive your Quest to anywhere you like.

This is particularly handy if you see a dirty spot and you would like to clean it without having the robot vacuum clean the entire floor. You can just tell your Quest robot vacuums where to go.

The Hoover app lets you schedule your cleaning, check the robot vacuum’s battery level, and get error alerts. No big deal, really, as iRobot’s Home app also allows you to do these as well. Plus, the iRobot Home app also has Clean Map reports and custom cleaning preferences that you can set right from the app.

The user experience on these mobile apps varies greatly, though. While Roombas have their own Home app that is very well-made and that delivers a problem-free user interface, the Hoover app pales by comparison.

The Hoover app accommodates all vacuums from the company and there are problems with usage. For instance, there are reviews that complain about the schedules not working as they should or problems with locating the robot vacuum.

Roomba and Hoover Quest robot vacuums share the same cleaning systems: a main rolling brush or debris extractor, a side brush, and a powerful vacuum. The brushes or brushless extractors would agitate, loosen, and sweep up the dust, hair, dirt, and debris, while the suction will pull it all into the dustbin.

Roombas have the iAdapt and iAdapt 2.0 navigation systems that use either optical or acoustic sensors for the vacuum to find its way around your floors, look for dirtier areas and give these areas a better clean.

These sensors also allow Roombas to avoid stairs or from bumping into things. The Hoover Quest robot vacuums also use the same sensors for the same things, and they call their navigation technology as Quest Nav 2.0 and Quest Nav 3.0.

There are more advanced mapping systems employed by the Roomba 960 and 980 that are not found on other Roombas. With an onboard camera, the 960 and the 980 can “see” your floors.

Earlier Roombas deliver only an hour’s worth of running time, while the Roomba 960 and 980 last 75 minutes and 120 minutes on a single charge, respectively. Hoover Quest 700 delivers 90 minutes, while both the Quest 800 and 1000 deliver two hours of running time.

These robot vacuums all find their way back to the charging dock when they finish a cleaning job or when their batteries run low. However, only the Hoover Quest 1000, Roomba 960, and Roomba 980 have the ability to automatically resume cleaning after recharging.

This means that if these robot vacuums lose power, they will return to their charging dock, and after recharging, they will continue to clean where they left off.

This makes these three vacuum cleaners a good option for those who have large houses because the robot vacuum will just continue to charge and clean until the entire floor is done.

Hoover Quest robot vacuums use invisible walls to ensure that your robot vacuum stays within the room it is cleaning or away from particular rooms.

Roombas, meanwhile, have three types of devices that can limit where your robot goes: virtual walls, virtual wall lighthouses, and dual mode virtual wall barriers. Which device you get for free with your purchase would depend on the Roomba model you bought.

Zeroing in: Comparing the Roomba 960 and Hoover Quest 1000

Out of all the Roombas and Hoover Quests, there are two that could be considered as the top models for each line: the Roomba 980 and the Quest 1000.

However, the 980 comes with a more expensive price tag than both the Roomba 960 and the Quest 1000, which have the same suggested retail prices.

And there is not much difference between the Roomba 980 and the Roomba 960, except for the carpet boost, which makes the 980 a much better choice if you have carpeted floors.

The better comparison would be the Roomba 960 and Quest 1000. Which of these robot vacuums is better?

Aside from the price, both have the same three-part cleaning system, lithium ion battery, Wi-Fi connectivity, auto recharge and resume feature, and advanced mapping skills.

The Roomba 960, on the other hand, needs the same time to recharge, but only delivers one hour and 15 minutes of cleaning time.

To put it in perspective, if you use your Hoover Quest 1000 for 17 hours, it would have spent 8 hours of that cleaning and 9 hours charging, while the Roomba 960 would only have 5 hours of cleaning within the same period.

Where the Roomba 960 wins. When it comes to cleaning, however, the Roomba 960 clearly has an advantage.  Roombas are known for their cleaning power and being the second best Roomba certainly puts the 960 in a better position as far as cleaning goes.

The Roomba 960 and the Hoover Quest 1000 might have similar cleaning and navigation systems, but the Roomba 960 is more aggressive in cleaning. Think of it this way, the Roomba 960 would be able to get into narrower spots and get closer to walls and furniture edges.

Compared to that, the Hoover Quest 1000 looks shy. Additionally, Quest 1000 also has problems going from hardwood floors to dark colored carpets. What’s more, the Roomba 960 uses the debris extractors, which is brushless.

This means that you spend less time maintaining the Roomba 960 and getting rid of hair tangles.

Zeroing in: comparing the lowest priced Hoover Quest and Roomba

The Hoover Quest 700 is the most affordable Hoover Quest currently available. Even at its price, it uses Bluetooth so that you could use your smartphone to control it.

It has a nickel metal hydrite battery that gives you a runtime of 1.5 hours, and it uses sensors to find its way around and keep itself safe from bumping into obstacles and from falling down stairs. It also uses the Tri-clean system that you see on the more expensive Quest 800 and 1000 robots.

Meanwhile, the Roomba 614 is more expensive than Quest 700 but is the most affordable Roomba available right now. It uses the AeroVac vacuuming technology and the iAdapt navigation technology. It has a lithium-ion battery, but it renders a short run time of only an hour.

The biggest difference, however, is that the more expensive Roomba 614 does not work with your smartphone. Instead, you need to rely on a separate remote control.

In this case, the Hoover Quest 700 gives you the chance to own a connected robot vacuum for a good price.

What is the ‘Anti Tangle System’?

With this system, you prevent the robot from damaging your carpets. The robot is capable of detecting the surface and stop working. This way you protect the wires and tassels of your home carpets.

How can I check the status of my Hoover order?

In the Hoover website, you can log in to the “My Accounts” tab. If you have previously made and confirmed an order, you will find all the information about your purchase. If you have any problems or questions, you can always reach out to their help support staff.

Does the Roomba hit the obstacles while cleaning?

Roomba has been designed with touch sensors in their bumper. Every time the robot is approaching obstacles, the sensors notified the robot so it can turn around, or lightly touch it.

The final word on Roomba vs. Hoover Quest

Hoover Quest and Roomba both offer you a robot vacuum that you could use to maintain the cleanliness of your rooms. However, while robot vacuums were designed to supplement upright vacuums, Roombas are more likely to be more efficient than Hoover Quest when it comes to cleaning.

The Roomba’s Home mobile app is also better designed and works less problematically when compared to the Hoover app.

Nevertheless, these two robot vacuum lines give you the flexibility to choose according to your needs. No matter what your budget is, or how big your house is, there is a Roomba or Hoover Quest for you.

For instance, the Hoover Quest has a variety that gives you to chance to own a capable robot vacuum even if you are on a budget, while the Roomba has models that allow you to get cleaner floors and carpets even if you have large homes.