It’s easy to get your hands on a robot vacuum cleaner, but it can be hard to find the right one to suit your needs. There’s so many to choose from, and it isn’t always clear what the differences are between the best brands.

We’re going to be comparing some of the more high-end models today, so let’s get started with some brief background information.

You might be surprised at just how far the technology has come over the past decade. Current models come equipped with a range of perks that allow for better movement, suction and noise reduction at no loss to overall power.

It’s not perfect by any means, but there’s enough quality to make it a serious option if you’re interested in upgrading from an older model or a traditional vacuum cleaner.

In a rush? Here’s the Bottom Line up Front:

The Samsung Powerbot vacuum cleaner comes in a variety of forms, to cater for a wide range of needs. The entry level Essential Cleaning model is nearly half the price of the Turbo edition, although it’s still an expensive range of products on the whole.

It’s priced at a premium when compared to models like the Neato D75, but you’re paying for additional features that allow the robot to go about its business without you getting involved.

Cameras and room mapping allow the cleaner to map better paths around your rooms, while there’s a focus on eliminating noise while keeping the vacuum powerful. You can use your smartphone to control the device, and it hardly takes up any attention as it works effortlessly in the background. 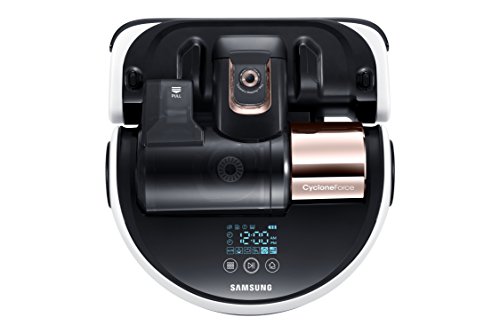 However, it’s worth noting that it has worthy competition in the form of the Roomba 880.

The Powerbot isn’t perfect, and that’s partly because it’s slightly bulky when compared to other models. There’s a disappointing lack of Wi-Fi, but it’s a capable cleaner that does a great job if you can pick it up for the right price.

UPDATE: There actually IS a new WiFi version. It is a standard feature of the Powerbot Turbo (most expensive), but also available on the mid range Powerbot WiFi here.

Here’s a complete review of the Powerbot VR9000 if you’re interested in learning more about one of the best in the product line.

The Roomba is one of the best known robot vacuum cleaners on the market, and the 880 model comes with a new cleaning technology system they’ve dubbed the AeroForce. It makes for a quieter experience, which is helpful as it scuttles along in the background. (Scuttles is probably the wrong word, as it glides smoothly while it works.)

(iRobot released one of the first ever commercial robot vacuum cleaners, so it’s clear that they know what they’re doing.)

It’s a luxury model, working as well as you would expect considering the engorged price point. It’s easy to setup, and the bin is large enough to collect a reasonable amount before it needs to be emptied.

It doesn’t always make it back to the power point, (and it takes a while to charge) but it’s hard to beat in terms of inbuilt-tech. (Unless you go for the newer Roomba 980, which is arguably the best vacuum cleaner on the market.)

It can be preset to allow for more control around the home, but it works best when left to its own devices. It is louder than the Powerbot, and the randomised cleaning patterns aren’t liked by everyone.

Here’s my full review of the Roomba 880 if you want more of an in-depth look at the features found on the device, as well as whether or not it’ll be right for you.

If pricing isn’t an problem, the Roomba is a brilliant device, although the Powerbot does have the added bonus of offering different models that could be better suited to your needs.

It’s hard to find issues with either, but it would be nice to be able to control the Roomba 880 with your smartphone. If that’s a must, then it might be better to go for one of the options from Samsung. You’ll probably be happy with either, but at a push I would go for the Powerbot Wifi if you value app control. It offers more value for money considering the extra features, and it’s easy to set up and get started.

UPDATE: Another solution is the recently release Roomba 960 (my review here). It’s essentially the Roomba 880 technology WITH WiFi capability. The 960 is available here for a price that’s competitive with the Powerbot’s.

Is it worth upgrading to a smart cleaning robot?

If you have pets or an elderly relative, it could be the answer to getting rid of some of the hairs and dust that can accumulate over time.

Different models will work better on different surfaces, so make sure to get one that suits your needs if you have pets. You’ll probably be surprised at just how advanced the newer models are, and the additional advances do make a difference over time.

If it fits your budget, it’s hard to find many reasons not to upgrade from the traditional option. (But don’t throw out your old vacuum cleaner just yet.) To be honest, it’s probably worth keeping both just in case.

It’s a step into the future, but they won’t perform miracles despite the price.

It’s probably cheaper to get a maid in the long run, but that involves interacting with other humans. On a serious note, a good model will save you time and money, but you can’t expect it to fully replace good old fashioned elbow grease.

After all, how is it going to clean the windows or the ceiling? You’ll have to dust the walls yourself, but you can also invest in a window cleaning robot like the Winbot. Check out my review here to find out more.

If you’re interested in getting one it makes sense as long as you can afford the expense.

Even the best robot vacuum cleaner won’t be able to completely supplant a bit of dusting now and then, but it’s still a great aide in the battle to keep the home clean while exerting the minimum amount of energy required.

Inferior models are also available at a cut-price, but they won’t offer the same quality as their established counterparts. A lot of money went into researching and developing the technology to be

These are two of the very best brands available, and it’s a struggle to find better on the market.

Final Take: Personally – if WiFi capability is not critical – I’d go with the Roomba 880 available at this listing. 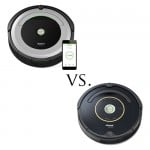 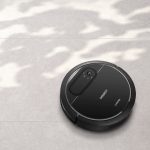 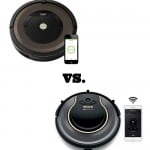