Swagtron has been very active in the hoverboards space and the company has scored many firsts, including releasing the first hoverboard that is UL2272 certified. Over the years, Swagtron has come out with several models, each one having new features and great technology under the hood.

With the Swagtron T6 Off-Road Smart Board, the company has come up with the first hoverboard that can accommodate the heavier set while also boasting of the fasted top speeds available in the market today.

Should you buy a Swagtron T6?

Features of the Swagtron T6 Off-Road Smart Board 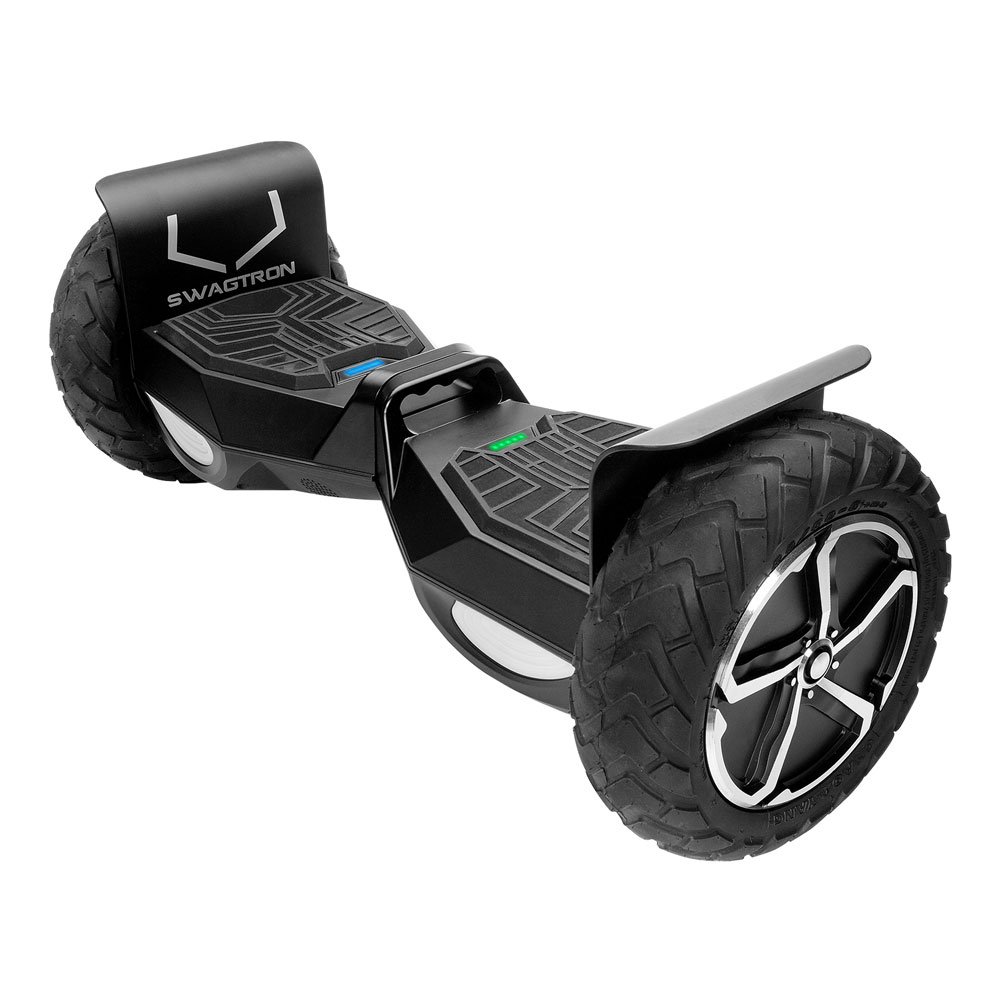 Flexible and tough. The Swagtron T6 does not only look good, but it is built tough, too. The hoverboard can accommodate people up to 420 pounds, making it suitable for just about everybody, even those who have not tried riding hoverboards before because of weight restrictions.

You can even ride the Swagtron T6 on any terrain, taking it over smooth flat surfaces as well as through mud, on grassy plots and, on gravel. The Swagtron T6 can also handle steep inclines of up to 30 degrees.

This flexibility and durability are augmented by 10-inch tires. The doubly rugged and tubeless tires make it easier for the Swagtron T6 to traverse on any terrain.

Beginners can also use the Swagtron T6 with the learning mode, while those who have prior experience with hoverboards can take advantage of the standard riding mode.

Design and build. The Swagtron T6 uses top quality materials. The casing is made out of hard ABS plastic and aluminum, while the rubber wheels have aluminum rims. The reinforced body has a tough shell while the anti-slip foot pedal is made wider.

The little details also help make the T6 look awesome. The non-slip foot pedals have a design that looks like a Transformers logo. The T6 comes in three colors: desert camo, pink camo, and matte black. It also has a built-in handle that makes it easier to carry it around.

Speaking of carrying it around, the Swagtron T6 weighs only 2.6 pounds, and measures 6.2 inches wide by 3.5 inches long, and stands 2.3 inches high.

What’s more, the T6 has a battery level indicator, which makes it very easy to know if you need to recharge it or not. The battery needs to be charged for up to three hours.

LED lights. The Swagtron T6 has a LED lights up front and at the back that changes colors as you go, stop or turn. This helps you ride safely while also looking very cool.

Pipe in your music with Bluetooth. The Swagtron T6 can help make your rides more enjoyable. It acts as a Bluetooth speaker for your phone, allowing you to ride to the beat of your own music!

Meanwhile, Swagtron T6’s RHoS compliance means that it does not use hazardous materials in its hoverboard, and the ASTM certification just proves that Swagtron complies with all of the standards they say they comply with.

Mobile app. Using Bluetooth, you could set your Swagtron T6 riding mode (learning or standard), check the battery level, and see a map of the route you just took. 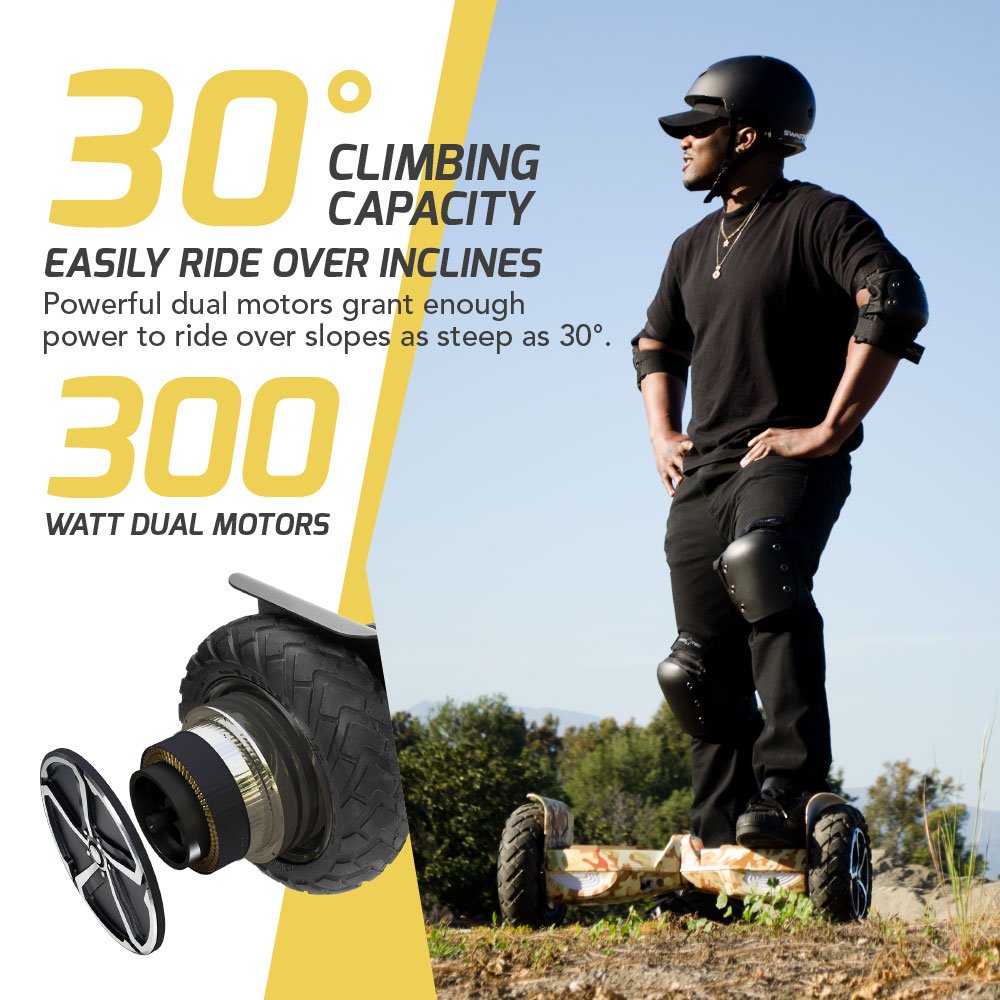 The Swagtron T6 has one of the most powerful motors out of all Swagtron hoverboards. It also has all the features that the company is offering including the learning mode, Bluetooth speakers, LED lights, and the mobile apps.

The lithium ion you find on the Swagtron T6 can give you a range of 12 miles or 19 kilometers on a single charge.

The company does not divulge how many minutes that would go, but testing the T6 using normal operations such as spins, turns, going back and forth and other movements, the T6 could give you around two hours of running time. That is impressive.

You should be aware, however, that there are several factors that could lessen the hoverboard’s running time, including speed and riding style, topography, temperature, and weight. This means that, in order to get the most running time with the T6, you should:

If you have a taste for speed, then you should know that the Swagtron T6 is the fastest hoverboard out there. It can beat out other hoverboards with top speeds of 12 mph. In comparison, the Segway miniPro is a bit slower at around 10.3 mph.

The biggest plus for the Swagtron T6 is its ability to handles different terrains. The T6 does not have problems going over packed sand, grass, or dirt roads, and navigating steep slopes. 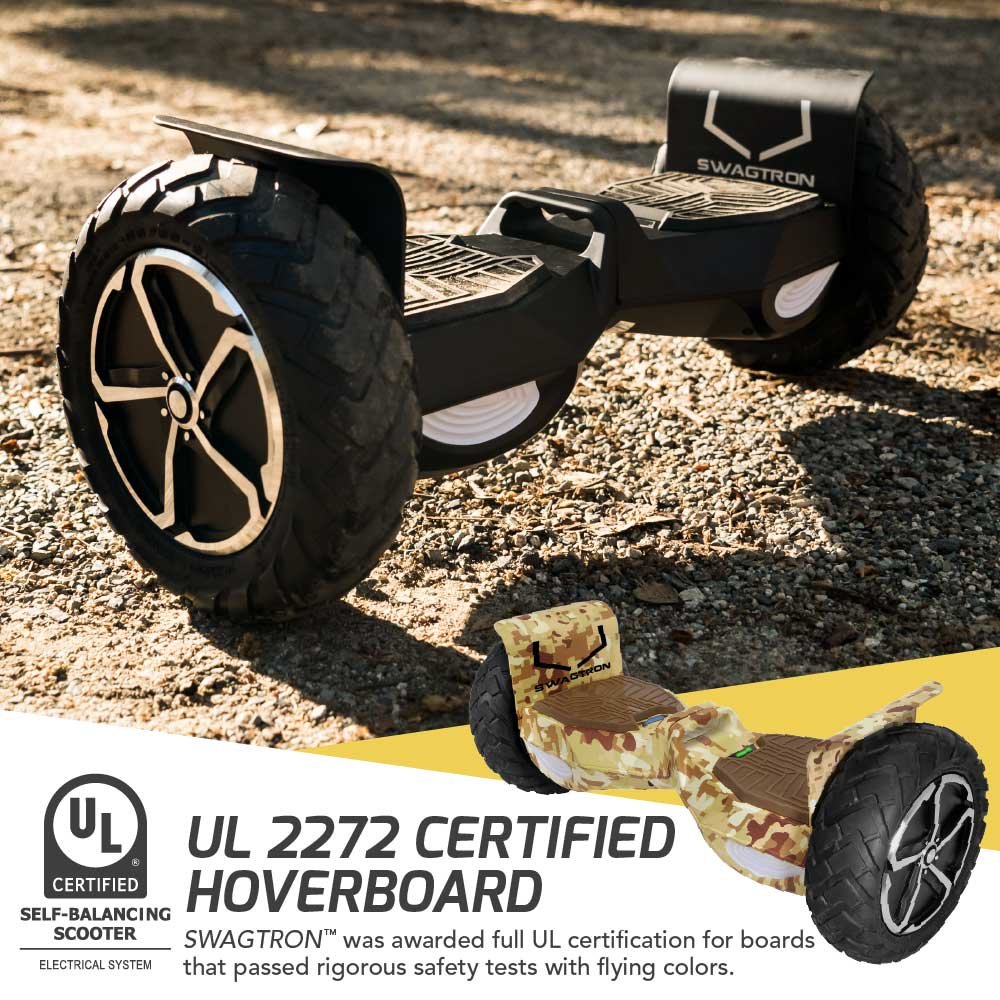 Compared with the earlier Swagtron hoverboards, the T6 is the most expensive. However, it is for a reason. It has the most powerful motor, a good battery capacity, the longest range traveled on a single charge, and a maximum load of 420 pounds, almost double the maximum load of the Swagtron T3.

Looking at the comparison table, it is obvious that the T6 dominates over all Swagtron models. However, if you look at the features set of theT6 and the T3, you would realize that it shares pretty much the same features, specifications, and functionalities.

With a more affordable price tag, the T3 might be a good choice for those who are not really looking for speed but would still want to enjoy stepping on their hoverboards to get somewhere. So, if you are looking for a cheaper alternative, do check out the T3. 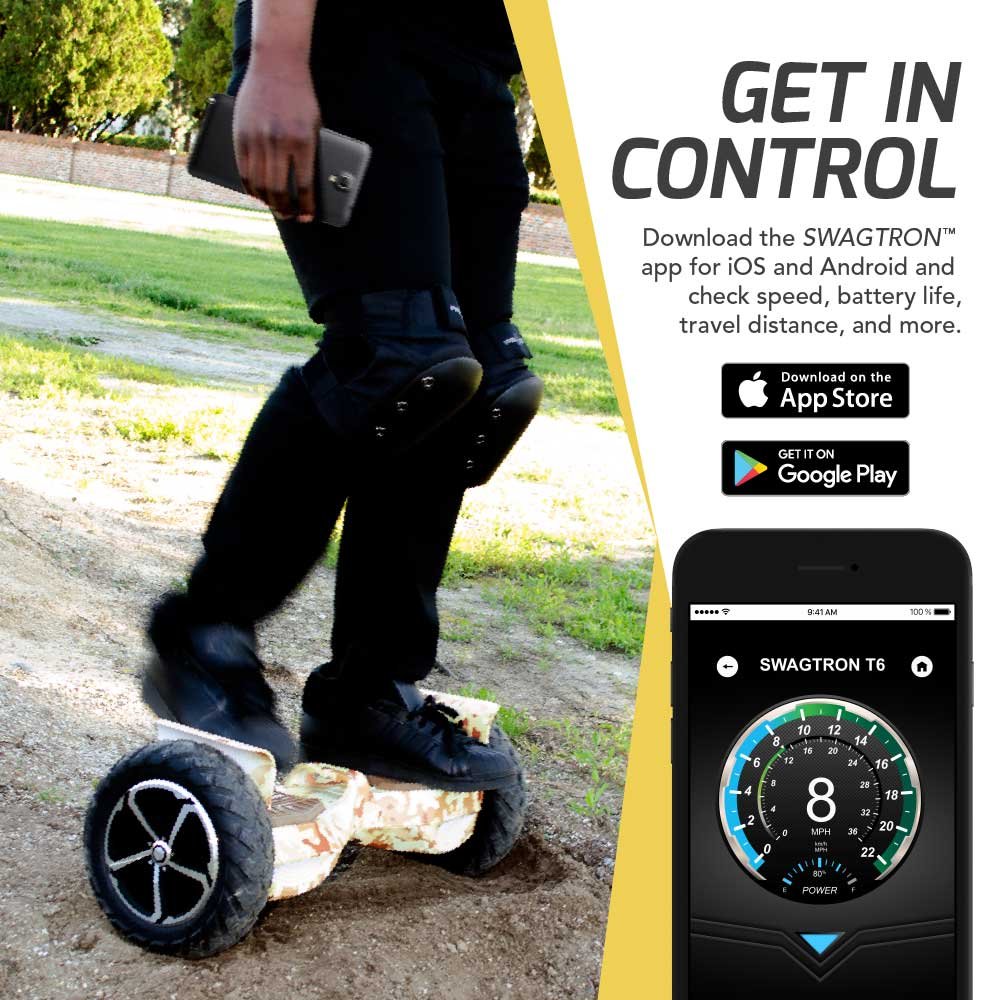 While the Swagtron T6 is a good product on its own, the chat support might not be entirely helpful.  We tried to verify what the company meant by battery watt/hour, and the company’s chat support gave us different answers, none of them addressing our concern.

In fact, we talked to three different chat support agents and they all gave different explanations that did not help. Therefore, if you have any questions regarding the T6, you might as well just read the user manual provided on their site or risk getting inaccurate answers to your questions.

Still, despite that unfortunate experience with their sales support, the company does have good after- sales support. When it comes to hoverboards, having good customer support that can help you troubleshoot problems and maybe even get replacements for problematic units is very important.

The company delivers on these aspects. It also helps that Swagtron T6 comes with a one-year warranty, which is longer than what other companies offer.

Moreover, the Swagtron T6 might be good for different terrains, but it is not waterproof. You might not want to use it when it is raining.

If you want a Swagtron hoverboard that is waterproof, then get the Swagtron T8 (read my full review here!), which has an IPX4 rating that means it is safe from minor splashing and minimal contact with water.

The Swagtron T6 has the same battery capacity as the Swagtron T3, but has a more powerful motor. The T3’s motor is rated at 250 W while the T6 is rated at 350 W. This might mean that you will be spending more time charging your hoverboard than actually riding it.

Nevertheless, the company promises 19 kilometers or 12 miles of range on a single charge, and that would be enough for most people to get from their home to their destinations.

The Swagtron T6 is also one of the heaviest hoverboards around, weighing around 30 pounds. It weighs the same as the Segway miniPro, the Halo Rover, and the epikPro Premier. The weight makes the T6 less agile than its lighter counterparts, especially the Swagtron T3.

Plus, it does not help that the T6 has a wider base. As a result, you have to slow down in order to turn, which can take some of the fun out of riding a T6.

Before you buy the Swagtron T6 Off-Road Smart Board… 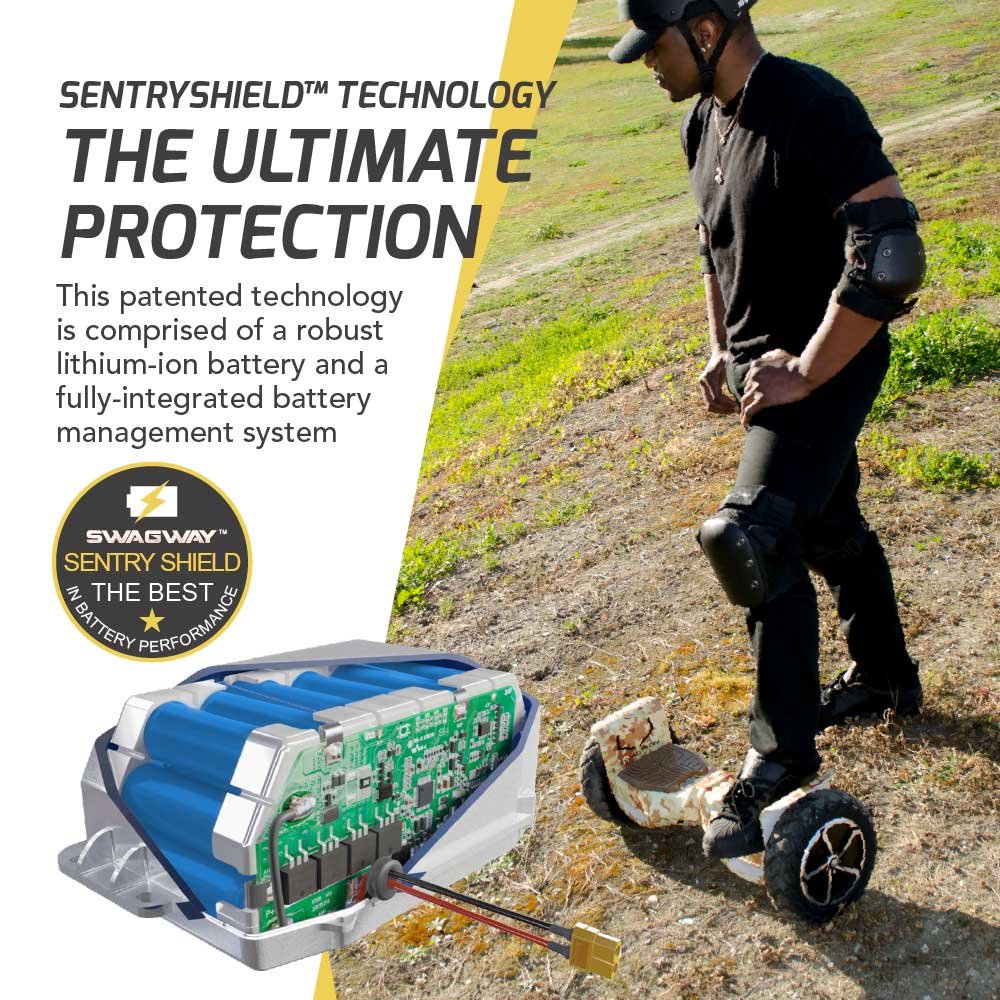 You might also want to consider a Segway miniPro, which has practically the same – if not a little better – performance than the Swagtron T6. It does a better job at handling slopes and a wide variety of terrains. It is significantly better when driven over short grass and thresholds.

The miniPro also beats the T6 in terms of run time. On the average, the miniPro’s battery gives you 25 minutes more running time, and a farther range reaching close to 15 miles. Both the Swagtron T6 and the Segway miniPro sell on Amazon (For the latest prices and discounts, check here).

If you want value for your money, then you should consider buying a Hoverheart, which sells for less but still delivers good performance and boasts an embedded Bluetooth speaker, as well as LED flashing lights.

The Swagtron T6 is a good self-balancing hoverboard that can handle a wide variety of terrains, can accommodate heavier riders, and remains the fastest hoverboard there is. The company is known for making safe hoverboards and they have the certifications to prove it.

The T6 should prove to be a good hoverboard for those who want to travel short distances, no matter if they have to go through gravel, dirt paths, or sloping inclines. At its price, it ties with Segway miniPro in price, performance and stability. Definitely worth considering! 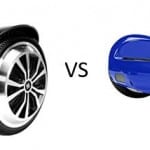 SwagTron T1 vs T5 – Which SwagTron is a Better Value? 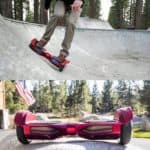 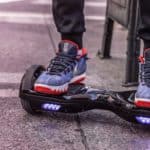 The Best Hoverboards Out There That You’ll Love 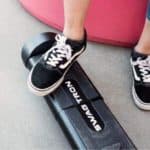 The Swagtron T8 Review – Does it Live Up to the Hype?