Imagine, if you will, two technologies that have caused significant disruption in the way society thinks. Now, consider that these two technologies come together to enhance connectivity and transparency. This is exactly what is happening in our world as the Internet of Things and Blockchain technologies merge with one another.

Blockchain technology, which is typically thought of as the power behind cryptocurrencies like Bitcoin, has the power to be a huge disruption is any number of verticals, along with the Internet of Things. What can we expect when these two technologies combine? First, let’s clarify a few things. 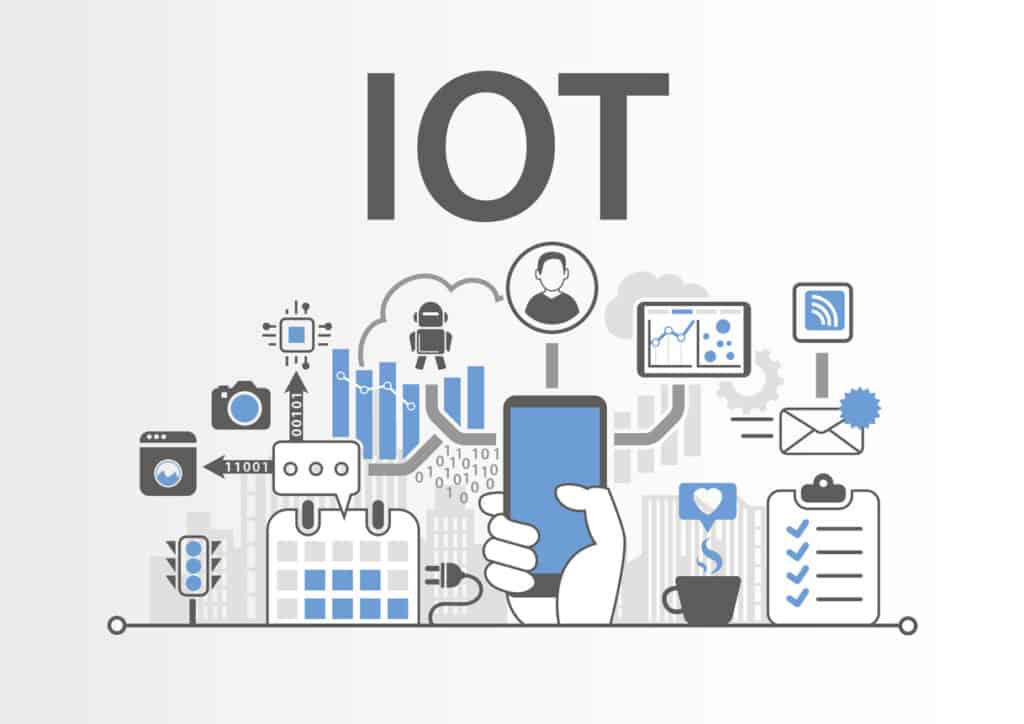 IoT is the idea of embedding sensors or other electronic components into items that we use each and every day. This allows the devices to connect and exchange data between one another. This industry is growing at a rapid pace, and while IoT is typically related to the home, there are many different industries impacted as well.

The goal of IoT is to make life simpler and easier. Smart devices users can control with smartphones are one method in which IoT accomplishes that goal. There are also many gadgets that users can program with artificial intelligence.

For efficiency, many devices gather user information, which inherently creates security risks. This means there are vulnerabilities in IoT devices, which are prone to hacks and cyber attacks. IoT is lagging in this area and the lack of a security model is a reason for concern.

Blockchain is a distributed ledger that records transactions. Traditionally, the blockchain is used to secure transactions of digital currencies via the internet. Users each have their wallets, which are used as nodes in the network. Transactions are encrypted, which helps to secure them. A digital signature prevents tracing of a wallet and keeps data from being tampered with.

For a transaction to complete between users, it has to be confirmed by the majority of the nodes on the network. This helps to prevent data-breaches and fraud prior to completing the transaction. As a result, the public is the party controlling transactions, unlike financial institutions or banks. 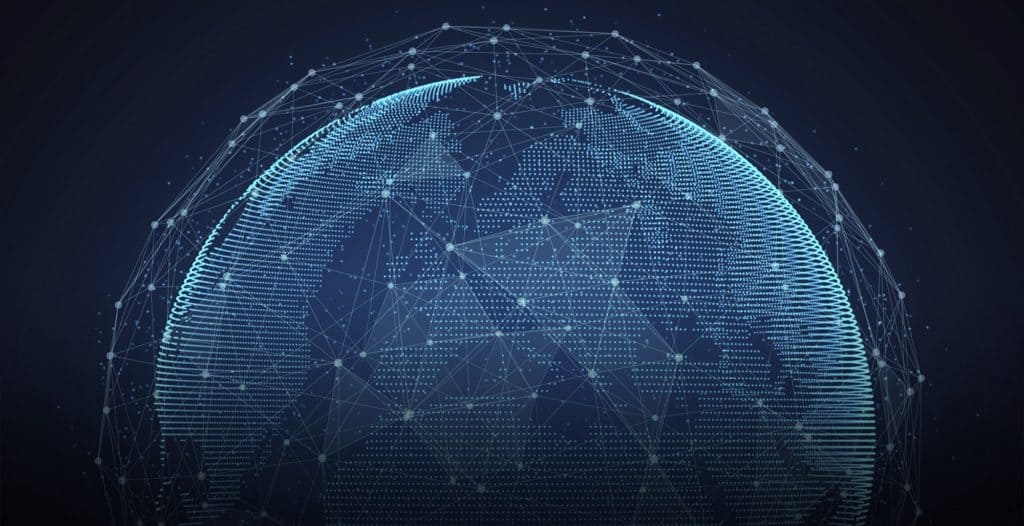 If you take a look back through history, it’s evident that when two disruptive technologies come together, new and dynamic results occur. The best advantage blockchain has over other technologies is its data security. Coincidentally, this is one of the biggest weaknesses of the IoT industry.

Transparent data-transactions, decentralization, and immutability are the biggest advantages blockchain employ over IoT technologies. As a result, the IoT community is searching for ways to integrate these features to enhance its data security.

The benefit here is that user privacy remains intact as groups can be placed in anonymous classifications which prevent them from being tracked. That means IoT devices can make use of the data stored on the blockchain without compromising user data.

There are benefits for blockchain here as well. By pairing with IoT, blockchain is showing that it has value in industries other than digital currency. Working with IoT shows that blockchain can be used on a regular basis while setting itself apart from cryptocurrencies.

It’s an exciting time as these disruptive technologies work together to create unique and dynamic solutions to everyday problems.

IOT Chain is a technology that strives to create an economy of sharing within the IoT environment. The devices will live in an energy efficient and decentralized environment while gathering user data. This data will then be consumed as fuel for AI development. Users are rewarded for supplying fuel.

Within this type of network, the connectivity between the smart devices in a connected home can flourish. There is no need to worry about privacy concerns, malicious cyber attacks, or traffic congestion. IOT Chain addresses all those issues with its blockchain technology.

The integration of IOT Chain into a smart home can make a huge difference in the way a connected home functions.

To have a more in-depth understanding of exactly what the IOT Chain hopes to achieve, it’s important to understand a technology known as “Trusted Execution Environment,” also known as TEE. TEEs are already operating inside many connected devices. Most prominently, they are a large part of Android smartphones.

Thanks to this type of technology, the IOT Chain team is creating blockchain code that has the ability to merge with hardware. Recently, IOT Chain developed a systematic approach to allow for more secure transactions between peripherals and crypto blocks. This means these types of transactions are safe and protected from malware attacks.

This fascinating technology has offered proof of concept and has been approached by Samsung for implementation into some of its smart home devices. Provided the technology performs the way it should, it won’t be long before SmartThings offers components with IOT Chain blockchain capabilities. That means your connected home will not only be smarter, but safer as well.

Ruff Chain’s goal is to create an ecosystem in which blockchain and IoT technologies can come together. This project aims to improve commerce using the ability to connect peer-to-peer network and convert them from the virtual world and into real-world applications. The overarching goal of Ruff Chain is to define a solution for issues created by paid and trusted interoperability.

Paid interoperability has to do with the financial side of the platform. It determines how it is managed and controlled. Trusted interoperability, on the other hand, focuses on security and providing transparency between connected devices.

Ruff Chain tokens are used to perform transactions on a public chain ecosystem. The Ruff currency will be the only digital currency existing on the Ruff Chain blockchain. So, for instance, if a user wants to purchase data from a separate user, the first user not only pays for the data but any charges for the transaction as well.

While this project isn’t as far along as some of the others on this list, it is still a project worth following. Both Microsoft and Tech Crunch have given awards to Blockchain based on its concepts and the amount of work it has completed since its launch.

Slock.it aims to be a physical representation of blockchain technology, while using said technology. This digital locking technology is built on the Ethereum blockchain and controlled by smart contracts.

Slock.it wants to use its technology to allow users to open anything. This can range from padlocks and bikes to houses and cars. By using Slock.it, your rental can become completely automated. The technology allows for rental of wifi routers to unused offices. With Slock.it’s infrastructure, we really will live in a shared economy.

Slock works with smart lock producers who want to implement Slock technology into their devices. With Slock, you can open up a smart lock by paying the device itself. It’s an autonomous transaction and entity.

Based on its technology, Slock.it solves a problem. It gives users the ability to share, rent, or sell property without using a middleman. Additionally, Slock can be embedded into a wide variety of smart devices. Slock.it runs on the Ethereum blockchain, so it validates what is occurring and determines whether or not they are the authorized user.

Users can then use their smart phone to sign transactions, which will open or close the device. Additionally, Slock.it it a platform ideal for developers. Any develop has the ability to build applications on the Slock.it stack.

Arloid is a company that uses blockchain-based systems to improve upon the current security of IoT devices and password management. It also serves to make the login experience user-friendly and faster.

Arloid has developed an IoT ecosystem which uses blockchain protocols that are built with smart contracts. With its easy-to-use and security ecosystem, users can be assured that they are using the most up-to-date IoT and blockchain applications available.

With the smart home system offered by Arloid, users will have access to a wide range of features. These include ease of use, a unique design, automated syncing, and a high-quality performance. It’s these capabilities that set Arloid apart from others in the same arena. 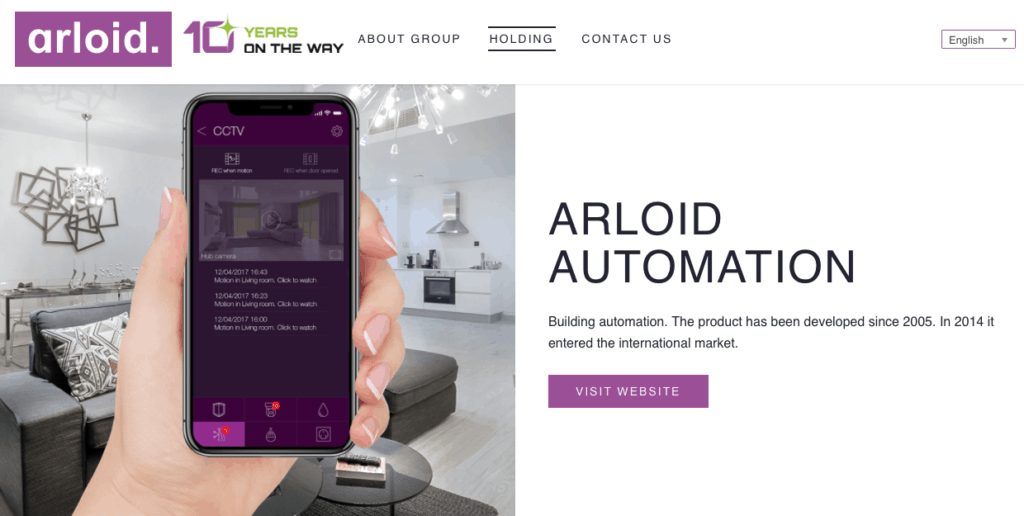 Arloid aims to solve a problem which is divided into three distinct layers: creation, ecosystem, and hardware. From a hardware perspective, the company aims to address issues with compatibility. Many home devices require many different mobile applications. This means users must pull out their smartphone and find the app, which adds to the amount of time it takes to perform a certain action.

This project also strives to solve privacy issues associated with cybersecurity. It’s no secret that this is an area in which IoT is lacking and Arloid is determined to make it a priority in its system. The Arloid Smart Home System plans to solve these types of issues through any means necessary.

Arloid Automation wants to use the growing demand for IoT components and make its system the most relevant and innovative system available. It wants to be easily available to consumers while making its smart home system easy to use and navigate.

Lastly, Arloid tries to make itself developer friendly by removing barriers experienced with many IoT devices. Developers are encouraged to test these devices so that when they are ready for deployment, they are ready to meet the needs of users and provide optimal smart home functionality.

Vionex is a home system built on blockchain technology with a Smart Home Application. It is perfect for smart, automated living. This project strives to create a connected home for the future. This would encompass not only completely automated controls but every aspect of your daily activities. 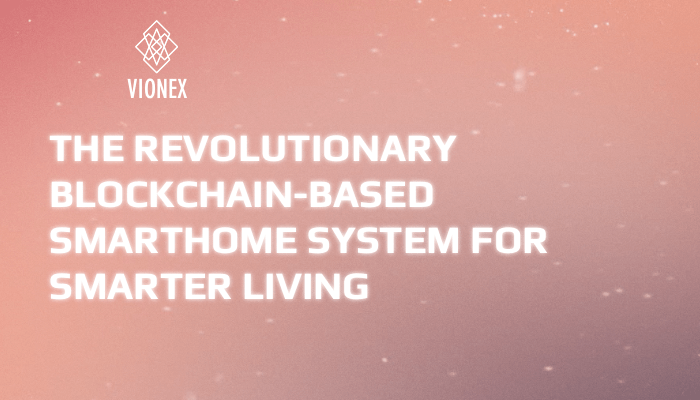 Here is a list of the features and functionality you can expect with the Vionex Smart Home System:

The Vionex smart home system will record every order and every setting users make on the blockchain. This helps to ensure that your connected home is experiencing maximum automation capabilities. Users can also overwrite or adjust settings kept on the blockchain, which allows for absolute autonomous control over their home devices and appliances.

With the use of smart contracts, the Vionex smart home system verifies, facilitates, and enforces directives upon execution of said contract. It does so in a transparent and automatic method so the user knows exactly what is going on. This system is backed by a multiple signature authentication protocol that prevents any vitals from being altered.

The Vionex smart home system is intuitive and can be used on all devices. It has no shortage of features that any smart home would find useful. This system provides a high level of automation, security cameras, smoke detection, and lighting that any smart home user would dream fo having.

As you can see, there are many projects in which smart home and blockchain technologies are working together to provide improved versions of products that already exist. Whether it’s an improved smart home system or a way to rent your router for a few hours, these two disruptive technologies are changing the way people look at their everyday lives.

Not every technology and product will prove worthwhile but that doesn’t mean they aren’t worth considering. Keep an eye on these blockchain projects as the technology behind them continues to grow and mature. You might be surprised by the results.