The gap between professional and consumer home monitoring systems continues to narrow, with Zmodo’s latest looking very much like a pro system, without the price tag.

Packing a pair of cameras and 500GB of HD hard disk recording, it is a step up from a little cloud camera on a stork, for not that much more money. 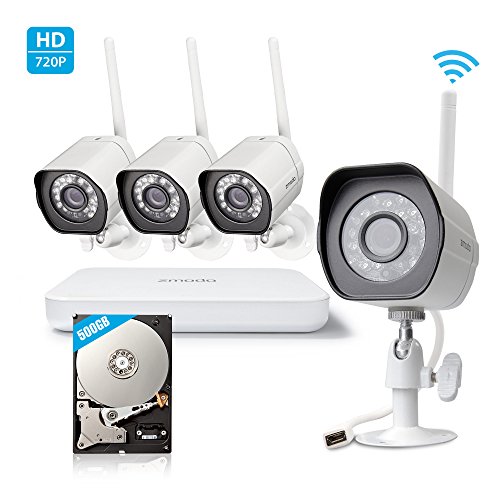 Considering you can buy a single HD home camera, getting a pair of Zmodo Smart Wireless cameras (For the latest prices and discounts, check here) plus a hard disk for wireless recording is pretty good value.

The cameras may only be 720p models, but that’s still plenty of pixels for spotting possible crime or unwanted visitors.

The bundle includes a network video recorder box for remote recording with a 500GB drive, that you can upgrade if you need more storage. It connects to your router via Ethernet and is a sleek black unit, which matches the gray and black cameras.

These are mains powered, but connect wireless to the recorder. Smartphone or PC apps allow you to watch what’s going on from wherever you are.

There’s a HDMI out jack so you can watch footage stored on the drive on a big screen, while notifications can be sent to the smartphone, to a MeShare app, so you can see what’s going on wherever you are.

The powered cameras offer 105 degrees of view, with IR LEDs for 10 meters of night vision. It can record at 720P for max quality and several lower resolutions. They are designed for indoor use only but can peer out of windows to cover outdoor spaces (an outdoor kit with waterproof cameras is available).

A tilt base means they can sit flat on a shelf or be screwed into the wall, so you can install them fairly high up, remembering the power lead, and tilt them down to prevent interference. They connect to your WiFi router, which sends the data to the NVR, or your phone.

The key feature of the Zmodo is that there’s no need to rely on any of these automated or costly monitored cloud services, that may vanish in future, or not be working in a moment of crisis.

That does put all the onus on the unit’s motion detection and the usual risks of the storage itself being swiped by a committed thief.

Set up of the cameras, app and a hard drive is pretty straightforward, especially compared to some consumer systems that come with badly translated, barely there, guides. Zmodo is a Chinese company but takes its international versions seriously.

If you already have something like a Zmodo doorbell, then you can link that into the system too.

The software makes it easy to have different quality settings for local storage and to send to phones, but the best mode should be left on given the performance of modern networks, a 2mbps connection is all you need for high-quality video.

Once installed, the cameras will do their thing, based on your settings, with the intelligent mode helping preserve hard drive space. Should there be an incident it can send an alert to your phone. If there’s a firmware update, then you also get an alert on your phone and can update the drive automatically.

As with most gadgets, the makers have insisted in putting a bright LED on the front, which helps during set up, but is hardly going to help any effort at concealment. Sure you can cover it up with some tape, but there needs to be an off switch in the software or on the camera to make these things less obvious.

The MeShare iOS app only gets middling reviews, suggesting it isn’t the greatest piece of mobile software. It is a little basic looking, with limited controls, so you can’t manually enable night vision, on the plus side it is small and still updated, so the company is still behind its products.

There is a new better-looking, greater-featured Zmodo dedicated app, so we’d suspect that it might replace MeShare in the near future.

The Zmodo feels like a security solution, much more so than some of those dinky cameras on a stalk. Even if it is just as at risk of power failure, outright theft or being covered or spray-painted as its rivals, you feel like you’re doing something to protect your home with one of these kits.

However, once installed, there’s a definite feeling of security and control.

The video quality is great, proving that 720p is more than enough for most uses. The cameras can monitor indoors or outdoor scenes just as well, and cope with bright or low light pretty well.

If you want an outdoor version of this bundle, one is available with two IP65 waterproof cameras. Also, if you want to cover a bigger property footprint, there’s a four camera bundle available.

While not quite up there with the company’s vandal proof dome cameras, this package works very reliably, with no dependence on the cloud for alerts. That’s key for many users who are loathed to rely on cloud services or pay the inflated prices some companies charge.