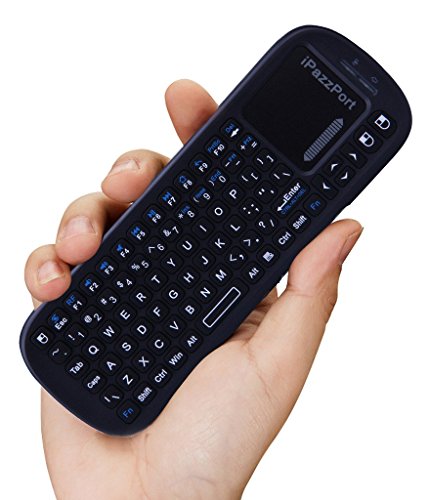 Traditional television remotes simply weren’t designed with Smart TVs and on-demand streaming in mind. Personally, I detested hard-to-use television remotes that had far too many buttons. Some of them were so hard to use it felt like I needed to take a college course and incessantly consult a manual to use the dang thing.

Using an old-style remote while trying to browse through a media-center interface or search for content on a Smart TV can be so aggravating it raises your blood pressure, too. Traditional remotes’ interfaces simply weren’t created for the purpose of the on-demand streaming content, so I highly recommend making your life one heck of a lot easier by purchasing a superior interface for your Smart TV: a keyboard.

Just about everyone has typing skills these days, and most people feel natural and second-nature when typing on a keyboard. It can really save a lot of time when searching for content, too. So if you’re impatient like me and hate laboriously and tediously typing on a virtual on-screen keyboard with arrow keys and a ‘select’ button, do yourself a favor and get a keyboard. You’ll thank yourself for doing so in the future.

What to Look for in a Keyboard

You may think that all keyboards are the same, but the truth is there are a seemingly endless number of keyboard varieties. If you’re picky like I am and want to make sure you’re getting the most bang for your buck, there are at least five different factors to think about before making a purchase. Of course, the cost is always a key consideration, though I don’t personally like to always buy the absolute cheapest model of any peripherals because you typically get what you pay for.

Furthermore, you’ll want to consider the size of the keyboard you’re purchasing. I don’t personally have a problem with handheld keyboards and hunting and pecking for keys with my thumbs, but I do know people who prefer full-sized keyboards. More importantly, however, you also need to consider which type of connection technology you want your keyboard to use. The most common seems to be wireless keyboards within the 2.4 GHz band, but there are also Bluetooth and infrared keyboards.

I typically don’t like infrared keyboards because they can have some line-of-sight issues if there’s an obstruction, like a table, a passerby, or an ornery cat. Bluetooth doesn’t have line-of-sight issues, but generally has a shorter range than 2.4 GHz wireless devices. In a home setting where the effective range only needs to cover the distance between your couch and your television, I don’t think Bluetooth shorter range is a real limitation.

That said, I do prefer 2.4 GHz wireless, though it can have some interference issues. Wireless routers and wireless landline phones (yes…some people still use them) often transmit data in the 2.4 GHz range, microwaves, and other similar devices. And lastly, you also want to consider the compatibility of the keyboard you’re using, because you may want to use it on multiple devices.

If you think the possibility of pairing it with laptop or HTPC is likely, then you may want to opt for a larger keyboard that isn’t shaped like a traditional remote. Also, make sure that the remote and keyboard is compatible with your model of television, Raspberry Pi, Kodi box, Fire Stick, Samsung Smart TV, or any other make and model of Internet-enabled television devices.

The first keyboard we’re going to look at is the iPazzPort KP-810-19S. I think the iPazzPort line of wireless keyboards are great, because they’re well designed, highly functional, and typically have compact designs. This model is roughly the size of a smartphone and sports a full QWERTY keyboard to aid search and navigation.

It doesn’t only work with Smart TVs, either, and is also compatible with the Raspberry Pi, HTPC, XBMC, PCs, laptops, and Android TV boxes. Naturally, it is a wireless keyboard that operates in the 2.4 GHz range as well, which is incredibly common. The keyboard lacks a number pad but does include arrow buttons, mouse click buttons (left and right), as well as a touchpad mouse.

Plus, this model is really cheap, so it’s a great choice if you’ve got a tight budget or just want an entry-level product. The downside, however, is that this keyboard wasn’t designed to be the best of the best. Instead of trying to create the highest quality product, the manufacturers decided to make a modest, inexpensive, and functional solution.

If you don’t want to feel like you’re paying too much for a keyboard, and not buying the cheapest one you can find either, I’d recommend the Seenda QQ-Tech keyboard as the best mid-range solution for your Smart TV. I adore this model and think that the designers and engineers absolutely nailed the size and shape of the keyboard. It’s slightly wider than the other models and has decent sized keys that make typing easier.

It was designed to be held like the old sliding cell phones before smartphones became mainstream. You can hold it like a video game controller too because there are buttons around the edge for right and left mouse clicks, which can be pressed with your index fingers. There is a mouse pad as well, complete with scrollbar features too.

The designers also had the brilliant foresight to equip it with a rechargeable battery. It’s always a pain running out of double or triple ‘A’ batteries and having to run to the store, but this model doesn’t have that problem. Last but not least, note that the keys are illuminated by a back-light to help you navigate in the dark. 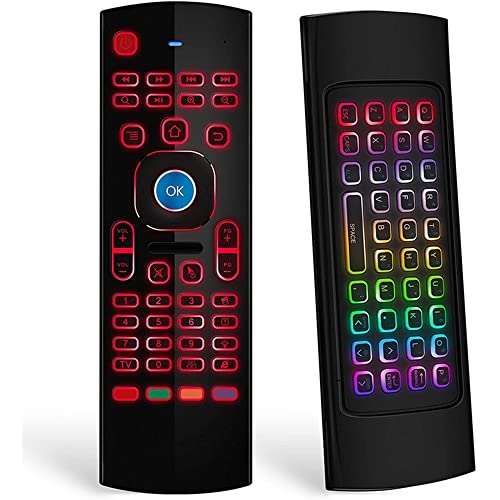 The FeBite MX3 Pro is another decent mid-market alternative that’s closer to the design of a traditional television remote. On one side, you’ll find all the traditional volume, menu navigation, video input, and number keys that were designed for channel surfing. On the back of the remote, however, there is a QWERTY keyboard.

Do note, however, that the keyboard really only covers the bare essentials, and focuses on character input. Other keyboard alternatives incorporate more buttons, such as a number pad configuration, function buttons (F1-F12), escape keys, shift buttons on both sides, and other text modifiers like an insert or delete key. This keyboard lacks programmability or extra function buttons. But if all you want is a convenient way to enter text into an HTPC or Kodi interface, what more do you really need?

This is not the cheapest model on the market, it’s pretty darn inexpensive. I also thought it was interesting that it has an infrared capability for the remote side, yet a wireless 2.4 GHz interface for the keyboard portion of the remote. Lastly, note that it’s compatible with a wide variety of devices including Windows, Mac, Linux, Android Smart TVs and boxes, Mini PC, HTPC, PS3, projectors and more.

I’m not sure how ‘cool’ this remote is, but it’s definitely a smart option for people looking for a functional yet inexpensive option. I intentionally wanted to include this model for people who don’t care about quality or fancy add-ons and just wanted the bare minimum solution that’ll get the job done. Its cost is an insignificant drop in the bucket for most people. Check out here for the cost.

It doesn’t look or feel like a traditional remote, however, and it lacks many of the advanced features of the other keyboards already mentioned. For instance, there is no mouse pad on this model – so naturally, there aren’t any mouse click buttons either. Also, note that there isn’t a traditional television remote interface on the back.

The back side of the remote, strangely enough, has seven different buttons: an arrow pad, two volume keys, mouse click, a back button, a home button, and a menu button. All in all, it’s a pretty bare-bones solution, yet the keyboard does include function keys. And as the name implies, this model does employ 2.4 GHz wireless connectivity to send signals to the receiver.

I have mixed feelings about the price of some of these keyboards. On the one hand, keyboards are generally inexpensive and don’t cost nearly as much as other electronics, such as hard drives. So I find myself thinking, “Why not get the high-end keyboard?” On the other hand, I find myself looking at some of the remotes and keyboards, knowing full well that some of them have features I would personally never get around to using.

For me, the most important qualities are 2.4 GHz wireless capability, a comfortable form factor, a mouse pad, and a full QWERTY keyboard. Really, anything is better than an archaic television remote interface. And if you dislike a keyboard, you can almost always easily return it for a new one (as long as you didn’t destroy it).