Robot kits provide a great start for kids and adults who are just starting to get into robotics and automation.  These kits teach beginners how robots and their many components work.  Robot kits include the motors, processors, sensors, and other parts needed to create a robot.

There are several robot kits available in the market, but the best ones for beginners are the 2-in-1 Makeblock DIY Starter Robot Kit; the LEGO MINDSTORMS EV3, which allows you to create as many robots as your imagination allows; and the Parallax Boe-Bot, which makes learning about programming and sensors very easy.

If you are looking for a robot kit that is very simple to assemble and can teach kids the basics of programming, then get the Makeblock DIY Starter Robot Kit.

Each Makeblock DIY Starter Robot Kit has everything that you need to create a robot using two designs: the tank and the three-wheeled car.  The parts include all the electronics as well as some tools and hardware that you will be using to get the robot up, like the different sized beams, brackets, plates, wheels, DC motor, battery holder, screw drivers, wrenches, screws, the sensors, and the USB cables.

There are two ways to control the Makeblock robot.  The Bluetooth version allows you to pair it with your smartphone, while the IR version comes with a separate remote control.  The differences between these two versions are:

Key Specs of the Makeblock Kit

What could make it better

2 Versions Too Many? Also, having two versions for infrared and Bluetooth seems a bit too much since the robot kit is modular and the manufacturer could have easily combined the two versions into a single kit, giving users both methods of control.

Limited Range Sensors: Further, the sensors included in the kit do not provide a wide range, so the Makeblock robot runs into walls more often than we would have wanted.

Spaghetti Wiring? Another improvement that the Makeblock robot could use pertains to its wiring, which might get a little unruly and might require time for you to keep neat and tidy when you finish.

The Makeblock DIY Starter Robot Kit can easily teach kids the basics of electronics, science, mechanics, and programming.  It is very easy to assemble and you can create two robotic forms out of the box. With a little imagination, you could create even more forms.  Moreover, you can accessorize your robot, letting you add an LED matrix, camera, more sensors, LED strips, and lights, all available from the manufacturer.

Makeblock DIY Starter Robot Kit retails here for the Bluetooth version, but the IR version can be found cheaper here.

The iconic LEGO brand has always made toys that inspired kids to create and build and the LEGO MINDSTORMS EV3 is for those kids who are not content with just building, but also want to see their creations move around.

In the box, you would find the large and medium servomotors; the sensors that include the color, touch, and infrared sensors; the infrared beacon; the EV3 Intelligent Brick; and close to 600 LEGO Technic pieces as well as several RJ12 cords that LEGO custom made for the EV3.  The main draw is to use all of these to create your own robot so you can make it as simple or as complex as you want.  The kit also has building instructions and you can download four more robot designs from the LEGO Web site.

Once you have assembled your robot, you can control it using the infrared sensor system with the included remote control, or you can download a mobile app to your iOS or Android device. 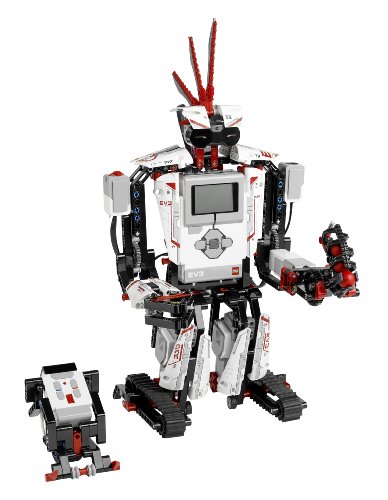 You can download LabView Software to any Windows PC or Mac.  This will give you an easy way to program all moving parts of your LEGO robot.  The software is very easy to figure out.

Price: This is one of the more expensive robot kits, including a few sensors and servos.  That means that if you want a more complex project, you might need to spend more for another MINDSTORMS kit.  Either that or you will have to content yourself with creating simple robots.

The LEGO MINDSTORMS EV3 is very flexible, easy to build, and very fun.  You can literally build any form of robot you want and you can program it easily as well.  Even with the limited number of motors and sensors, it is still at par with other robot kits.

However, what sets the LEGO MINDSTORMS is the community of users behind it.  You can see what others have done and get inspired to create your own robots.  You can learn how to program it or just use the programs created by other people. Be sure to check this listing on Amazon for the latest prices.

If your main goal is to teach your kids robotics and automation, then you will have a great resource in Parallax Boe-Bot.

You get a rolling robot that you can assemble in around two hours.  It has a BASIC Stamp 2 brain and comes with a manual that thoroughly explains what each sensor does and includes some programs that you could use for your robot.  It makes use of the PBASIC platform, a text-based programming language that would allow the kids to learn about programming concepts that they would encounter in other programming languages. 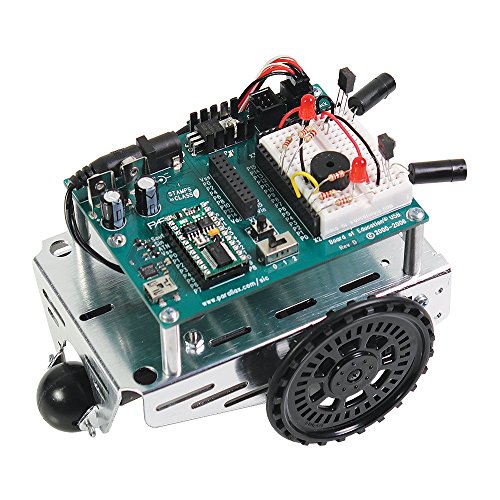 The robot uses several sensors, including infrared, touch and light sensors.  This helps the Boe-Bot run on its own.  Meanwhile, you can buy other sensors and other parts separately.  For instance, you can add a GPS antenna or include an accelerometer for about the same price.  Parallax sells these plus other sensors such as humidity, gas, light, and altitude sensors among many others.

Parallax promises that you need no programming to pilot the robot.  It also has an open platform where you could see the circuits and learn what they do so that you could create your own.

Be sure to check out this Amazon listing for the latest prices.

At its very core, all robot kits are a great way for you to introduce science, technology, engineering, and mathematics to your kids.  Beginners would also benefit from learning how to program using these robots.  These robot kits are simply fun.

So what is the best robot kit for you?

It depends.  If you are easily bored or if you have many ideas, then go for LEGO MINDSTORMS EV3.  If you like to have a much deeper learning experience with robots, their sensors, and other components, then Parallax Boe-Bot is perfect for you.  If you want something fun with less fuss, then check out the Makeblock Starter Robot Kit.

To make the choice even easier, check out this side-by-side comparison of the robot kits that we have reviewed here: